This weekend two things happened that affected my bike commute this morning. Three things if you count the passage of time. The first is that I rode the Ogre on Saturday, realized that the brakes were, if I were to used the technical term, "barely functional" (I don't know how exactly, but the pads weren't catching the rotor), still rode around a bunch (I mean, what choice did I have since I couldn't stop?), but then on Sunday, took the bike to the shop, where the brakes were fixed and the bike returned to functionality once more. Also on Saturday, I rode the Brompton (if you have the chance to ride two different bikes on the same day, do it. There's only one exception to this rule and it's when you have the chance to ride three bikes, do that) and was gifted a flat by The Universe in the midst of delivering a sandwich and since I didn't have a spare tube or tools with me and since I only realized that I picked up the flat after walking out of the sandwich shop, the bike is now sitting in an office in a building on Wisco, after having been walked down P Street through Georgetown and transported on a bus. And since you can't generally commute on a bike that 1) has a flat tire and 2) isn't in your possession, the Brompton was shelved in favor of the Ogre, which performed mightily on the mighty hills of my very brief bike commute.

The school year starts soon and with it, more terrible driving. This is true in both quality and quantity. Terrible driving around schools is the culmination of like sixteen different public policy failures, so rock on, everybody. Also, stay safe.

Stopped at the grocery store on the way home for broccoli, milk and some flowers. Transporting flowers by bike is somewhat tricky. It's less tricky if you don't care if they stay intact, but I didn't want to shove them in my bag which was full already and so I came up with this very clever (?) mostly adequate solution involving my cell phone mount. 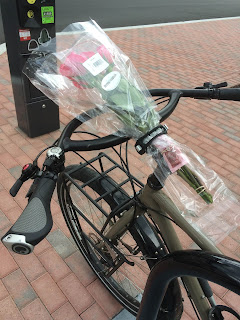 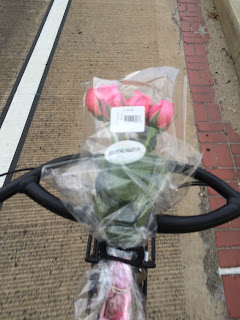 I sorta can't believe this worked as well as it did. None of the flowers were harmed, which is way more than I was expecting. I wondered if I would see any additional safety benefits and drivers being extra careful, but the so-called Eliza Doolittle Effect does not appear to exist.