Guest Blogging from the Sharrows: Lori 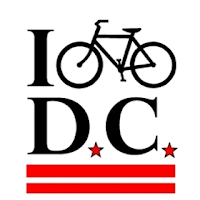 Hi, I’m Lori.
I am a biker. Bicyclist? Whatever.
I am guest blogging while our fearless leader is out of town, and thought I would make my inaugural blog a message of support to people on the fence about bike commuting. A “go team” kind of thing – boring, safe, unchallenging.
This isn’t my first blog, in fact, I am an experienced failed blog-starter, having presided over a short-lived work blog related to a specific project (most of my time was spent trying to get others to do the work), and having started two of my own – one I called “Dinner At Eight” for reasons I cannot for the life of me recall (and to which I never posted even once), and one called FLAT RAT. That last one was intended to be a blog about my bike commute. If you’ve ever biked in a city, you can quickly infer why I chose that title. I’ve tried to not think about the fact that I regularly ride over oozing smashed mammals and unrecognizable decaying birds, and then bring my bike through the living area of my home, over the hardwood surfaces on which my children sit and play….much.
Flat Rat never saw the light of day, either.
I began bike commuting four years ago at the age of 40. After years of driving the four miles (in my defense, most of that time I was also driving kids to schools, or multiple schools), or taking the God-forsaken Metro (two lines), I was inspired by two friends who successfully biked to work – one to downtown D.C. from Alexandria (south of Old Town) and one between Capitol Hill and Woodley Park. More challenging than what I was facing.
A girlfriend bought me a set of panniers, and there went my last excuse. I will forever be indebted to her.
If you live in DC, or in ring suburbs, you should bike to work, and here are some reasons why:
What are YOUR reasons? What tips and advice can you offer beginners?
How do we start a revolution?