I don't give as much love to the Custis Trail as I should. It's a pretty great bike facility and I appreciate Arlington County's efforts to keep it maintained. I decided that I would pick it up at George Mason today and ride it all the way to Key Bridge. I normally ride it either from Quincy or from Veitch, so today I would ride more of it than I'm usually accustomed to. An aside- I have no problem ending sentences with prepositions. I know that I'm doing it. It's just a blog. I didn't see another biker going in the same direction until after around Sprout Run, which made me kind of sad since I was bored riding by myself. The guy that I eventually rode behind didn't have fenders and I was riding too close, so I got some nice dirt sprayed in my eye. Sucked, but I've learned my lesson. The next person I saw was, I thought, a 13 year old kid on a Dahon. It turned out that it was an old Asian lady (I saw her again under the Whitehurst later on). My bad.
I decided that I would take the trails rather than bike up through Georgetown and Glover Park. I've run out of things to count, apparently, and I think we could all use a little break from the New Mexico Avenue bike lane blogging.
A lot of riders on the Capital Crescent, but I didn't count them. I tried, but I got distracted. First, by a guy riding an LHT that was completely bare. No rack, no fenders, no multiple water bottle cages, no saddle bag, no panniers, no handlebar bag, no basket, no frame pump, no nothing. I'm pretty sure that all Long Haul Truckers are required by law to look like this: 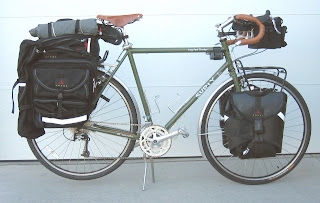 So what if you're only going to work and don't need to bring a tent? All Long Haul Truckers should be equipped for cross-country travel at all times.
Next distraction was a guy in a Princeton cycling jersey who waved at me. I don't think I knew him. Maybe he was just happy that Princeton made the NCAAs and he wanted to show that by waving at his fellow cyclists. It's pretty much impossible to differentiate anyone on the CCT, so I'm sorry if you're someone I know and I didn't recognize you. Go Tigers?
Then I saw a guy with woodchipper bars. So much torque.
A car stopped for me while I was in the crosswalk at MacArthur Boulevard. First time ever. Thanks.
12 Volkswagens between MacArthur Boulevard and AU. That seems like a lot. Macomb Street loves it some German cars.