Don't panic. It's called spring and it's perfectly natural.
I spent all morning (ok, like the 45 minutes I was awake before leaving the house) tittering (and twittering) about how excited I was to ride today. I would have slept in my bike shoes if my bed had a place to clip in. Or if Brooks made pillowcases. I wasn't disappointed- I spent most of my ride with a jackass smile on my face from how nice it was outside.
A few thoughts on transporting soup by bike:
Ok, that's the only thought I have about transporting soup by bike.
My chain slipped as soon as I started rolling my bike out of the door. I fixed it but my right hand looked like I just voted in an Iraqi election. But instead of the purple ink of freedom, I was rocking the black sludge of impromptu re-chaining.
The Washcycle endorsed my vague understanding of the Arlington Boulevard bike trail(s), so that' means I'm probably not too far off base. I decided to "go all jdland on it" this morning, in fact. 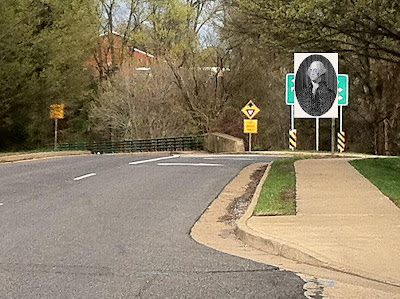 That's a vast improvement already. I'm not saying that JDLand doctors photos or anything, but has anyone actually been to a Nationals game to verify that the ballpark is really there? Just throwing that out there.
I decided to ride down Wilson Boulevard today in order to people watch, but there were very few people out. A few on bikes, including a guy wearing headphones. I don't endorse this, not because I hate awesome tunes, but because I think listening for cars is a vital part of keeping yourself safe on the road. Why make it harder on yourself?
On the Georgetown side of Key Bridge (the Georgetowni hídfő for anyone Hungarian readers out there, who only visit the blog for pictures of substandard bicycle routes and crying George Washington), I saw a mom biking with her child in a bike seat. On the back of the seat, there was a sticker that read "CoPilot." Cute, but I hardly think a child so young should be given so much responsibility. He can't even reach the pedals.
On Tunlaw, I saw a coworker jogging. I said hello. I don't know if it's her day off or what. She recognized me, which I always figure unlikely to happen for some reason. I figure helmets make us all look the same, but I guess that's not true.
Further up Tunlaw, I saw a mom jogging uphill while pushing a duplex SUV-style stroller with 700c (estimate) wheels. It had no children in it. This must be the Glover Park equivalent of Rocky's punching slabs of meat. It was in front of the Russian Embassy so there could be an Ivan Drago connection.
When I got to work, I noticed that my mechanical mishap had somehow led to chain grease on my left leg. Odd. I'm thinking about tattooing various black splotches on my calves to make this less embarrassing in the future. "No, I didn't get chain grease on me. Those are my tats," I'll say to the no people that actually care.