I've been on the phone with the cable company for the last half hour trying to restore my internet. Screaming to the customer service representative that I have an important bike commuter blog and tens of people are relying on me to provide their Friday evening entertainment didn't make the headway that I expected. In any case, everything is restored now and I will proceed to regale you with my tales of woe.
I mean, it wasn't really woeful riding home at all today. It was relatively beautiful weather, not too hot or humid. I was in a pretty good mood, probably on account of catching the first few lights on the way away from work and the bike felt good and my legs felt good and, overall, both of these things combined to make my trip home seem joyous rather than onerous. I've been doing this for a while and looking back, I think that "state of mind" when you start your ride makes a pretty big difference in how you approach your commute. Basically, it's like that cave on Dagobah. Except I've never looked at a jerk driver only to see that it's me. That'd be freaky.
I, like a lot of bike types, treat the stop sign at the intersection of Tunlaw and 37th and 37th (it's diagonal) like a yield sign. This is because I'm biking downhill and if there's a car coming uphill it has to turn left and that means it's going to block any traffic coming downhill from the other 37th. But yield signs mean stop sometimes and I do and that generally works out. This morning I saw a young woman and a little kid ride their bikes past the stopped cars on Tunlaw and turn rightish onto 37th with total disregard to any approaching traffic. Yikes! If you're going to play fast and loose with stop signs (as I often do), at least try to be sort of good at it. And maybe don't play as fast and loose if you're being followed by a 7 year old? Just a suggestion.
Remember that time you wanted to bike down S Street in Burleith? You don't? Because there's nothing there aside from rowhouses? Yeah, the people who live there are pretty happy about that. I think I'm going to go back to biking down R, high school be damned. Otherwise, you have to make a left turn from 35th and there's nothing so painful as having to make a left turn at a four way stop while on a bicycle. That means that there's three motorists who want to run you over, instead of just one. I cut my left short today and took it at the same time as the two cars opposite eachother on R were going. The guy across from me didn't look happy about it, but frankly, it worked out better for him anyway.
Anybody ask Terry Bellamy if they're re-thinking finishing the 34th street bike lane? Like three more blocks of a little white stripe? If I ask really, really nicely? Seems like every other parochial concern was addressed.
Saw stand up on a bike guy for the first time in a long time. That beard is really coming in. Maybe once it comes in, you'll have the self-confidence to actually use your bike's seat. Just suggesting.
Took a new approach to riding Fort Myer. I jumped the light to cross the entrance to the GW Parkway and rode from basically the end of the Key Bridge rather than trying to merge over after crossing Lee Highway. I guess it made a little difference, but it's still pretty tight if cars want to pass you. Actually, it pretty much makes no difference, but it sort of a little mitigates the likelihood of at least one right hook. However, it exposes you to impatient drivers for a greater amount of time, so ride with some confidence and expect to be passed too closely. Same with going up Nash.
I rode behind a man, briefly, who tucked his over-wide khakis into his black shocks and it looked like he had a giant tumor on his right ankle. This is a consequence of both rolling (the pant leg) and tucking. One or the other, dude.
Stopped at the liquor store on the way home. Love transporting litres of liquor by bike, except for the idea that someday I might crash and the cop or EMT will see my gin and my pills (ibuprofen, in this case) and write me off as some dissolute. Thankfully, nothing happened, except for seeing this bizarre ad: 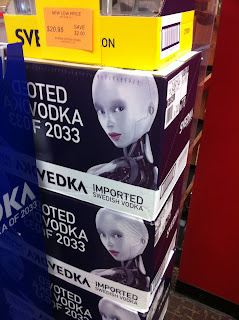 I found this to be disconcerting, not because I'm afraid of some sort of dystopic robot lady future, but because an alcohol company is using some knock-off intellectual property from A.I.  or I, Robot to try to sell vodka. What did those movies even gross?* Did they even leave any indelible mark on popular culture? Seriously? We're not talking iconic movies here and it's not even timely. At least use an avatar or whatever.
Some tips on transporting glass bottles of whatever by bicycle: don't cavalierly toss your u-lock in your bag. You might break those bottles and your bike bag might reek of gin and you'd probably get fired from your job as a result. Unless you're a writer or something. Luckily, it didn't cause any damage, but I should have been more careful.

* Together they grossed $222 million (domestic). That's barely half a Spider-man.