I'm late to writing this post. Apparently, I "worked" through "lunch" (when I normally write) and now I'm eating my cold pizza slice (lunch of champions) as I punch out another one of these beauties. Maybe you can read this over your afternoon coffee. Because if you're reading this, you are probably either a sophisticate who takes an afternoon espresso or a caffeine-addled maniac swilling the cheap stuff from an oversize novelty mug. All about the big tent here. Also, I'm late to writing this because I've been following the Terry Bellamy confirmation hearing. Turns out I have to move to Chicago now.
Here's what would be my contribution (were it a better picture) to MyBikeLane:
Once again, you've got an open parking space right there. You're doing no one any favors by idling in the bike lane. Just pull into the spot! You know how I deal with cars that are blocking the bike lane? I bike around them. What were you expecting, baseball bat? Geez. Get a hold of yourself. This blog isn't about elaborate revenge fantasies. (It's about melding self-pity and self-righteousness)
Who likes cool fixies? Anyone? Ok, here's a picture: 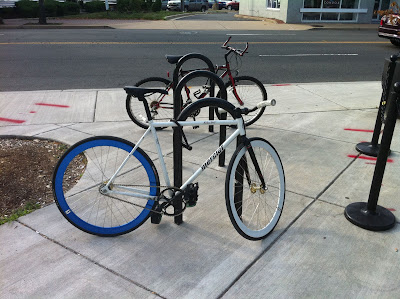 So, yeah, fixies are still a thing, even in Arlington. There was a guy standing nearby, whose unkempt beard-y appearance and weird shoes gave my the impression that this bike was his. He looked hipstery enough for it to be completely cliche. He didn't say anything when I took the picture, so maybe not. I probably would say something if someone took a picture of my bike and I was standing right there. Maybe he was just too buy rifling through his vintage-looking suitcase.
Sometimes you can tell when a driver is going to cut you off. Maybe it's because he's driving a little slower than traffic might mandate. Maybe it's because you can see his head swivel like he's looking for something. Maybe it's because you can see talking into his phone. It's just important to pay attention because when people are lost or confused, they're likely to drive there cars into the bike lane in order to stop and figure out where they are. You know where you are? You're in the bike lane. Next to an open parking spot! For all that people love their on-street parking, they sure would prefer not to occupy it when given the chance to remain in a bike lane. This problem would be completely eradicated if we put the lanes on the inside of parked cars.
I'm sure I had other things to complain about, but I've long since forgotten them.
How many cars have both a John Paul II "Defend Life" bumper sticker and an "Obama 2008"? Maybe it's just Doug Kmiec and he lives on R Street? Though I'm pretty sure he would have scraped off the Obama one by now. Must be someone else.
Passed another bike commuter going up 37th. I did not say "Let's do this! Let's do this!" I really hope that I run into that kid again- that was the highlight of my week. Other than my birthday.