My front brake levers are covered in a sheen of sunscreen and have subsequently become quite slippery. There's nothing quite as terrifying (to me) as the idea that I'll go to brake and my fingers will slip and disaster will follow. I'm going to wipe them clean this afternoon. Each bicycle part comes with its own unique set of worries.
A more leisurely pace today. I rode Wilson, which was especially good due to bike traffic light enforcement on the Custis. I guess it was only a matter of time before the cops were going to do this. I wonder what effect it will have on compliance (none). Does anyone know if they were handing out tickets or if this was just a warning? Also, anyone know if they were enforcing jaywalking laws? It's a multi-use trail after all and I can't imagine that they wouldn't cite infractions for one group of users while doing it for another group.
This intersection is a horrible mess. I urge caution when biking through it. 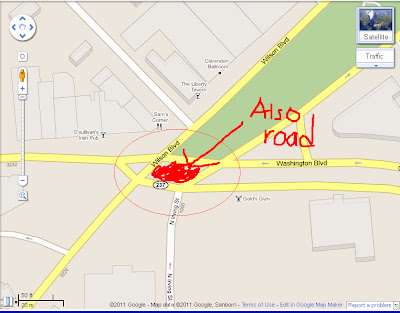 Google maps does this funny thing where they keep their yellow lines (indicating road) the same size regardless of the fact that the road itself gets very wide at certain points. Is there a pleasant pedestrian plaza at the intersection of ashington, Wilson, Clarendon, and Irving? No. It's just a big patch of pavement, in the middle of which are drivers engaged in a tete-a-tete as they wait to turn left (long after the light has changed).
Got stuck behind two cars stuck behind a loading private bus at Wilson and For Myer. I think the bus was loading  a group of civilian federal employees, as many buses in that area are wont to do. I wonder where it was taking them- I'm assuming to some sort of military installation. If anyone knows more about these mysterious private buses, please let me know. It was sort of a crummy spot to be stuck because cars were coming behind me downhill around a bend and I didn't want to get out of the lane for fear that I would become a hood ornament. Eventually, the light ahead changed and I was able to work my way around and then I jumped the red to cross For Myer. Not that I feel that I need to explain myself, but I sort of feel the need to explain myself. I jumped the red because crossing traffic had cleared and I didn't know if the cars and bus in the lane to my right were going to proceed straight or if they were going to turn. If they were going straight, I would have been stuck in the center lane with the aforementioned hill whooshing cars coming up both directly behind me and to my right. Believing that to be considerably less safe than slowly (and illegally) rolling through the intersection, I'm reasonably content with my choice.
Mount Vernon Trail intersection with Lynn sucks. I would love to know the number of bike-on-bike accidents there as people merge from Lynn to the Key Bridge sidepath.
Any political will to turn the parking lane on the south side of M into a bus/bike lane? I guess it's a de facto one in the morning, but it'd be nice to legitimize up. That is, until we adopt Layman's plan.
Why was a Blue Moon truck unloading kegs outside of the Wisconsin Avenue Nine West?  I've had the pleasure spent some time in Nine West and I don't remember there being a tap. If this is a pilot program designed the appease significant others while their partners shop for shoes, I wholeheartedly endorse it.Why aren't there more bar/shoe stores anyway? Someone should get on this. "Yeah, she needs a size 8 and I'd like a martini."
Nothing like busting your ass to beat the bus uphill. Given the choice between sitting in the exhaust of clean natural gas (um, not based on what I smell) and working yourself into a sweaty stupor, I'm taking the stupor.
Lots of people in jogging attire, but no one was jogging. Post-jog walk? Pre-jog warmup walk? Not jogging clothes at all, but very casual Friday? Speaking of which, one of my favorite games to play is "what kind of pants are those?: light blue edition". Your choices are: light wash jeans, seersucker, cotton pajamas and scrubs. It's surprisingly fun and you'd be amazed by how consistently wrong I can be.
Sometimes I ride up Wisconsin in the three foot gutter between the parked cars and the dashed stripe, with two full travel lanes to my left. This generally works out ok because there's ample room for car traffic to my left and almost never do any of the parked cars have any occupants. Today, however, my little gutter kept getting invaded by drivers uncomfortable driving too closely to a large truck slowly working its way up the left most lane. Yeah, I totally understand how uncomfortable it can be to be too close to a vehicle that vastly outweighs and with a driver who might not see you. Geez.
One of these parked near the bike rack this morning: 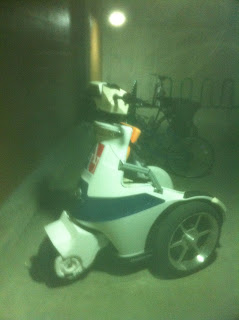 It's an all-terrain three-wheeled super-transporter that's used by campus police. I'm sure it's much more cost effective to purchase and maintain one of these than a high-end hybrid bicycle, like the ones that bicycle police officers use. Silly.