It was a nice day yesterday. You can see as much (or take my word for it) from the official locker room weather station.
I took my work laptop home with me yesterday and my bag doesn't wasn't really designed for it. I think if this were to become a regular thing, I'd want to get a different bag, maybe something that's a little more structured. I also unthinkingly tossed my u-lcok in the bag, so I should be happy that I didn't smash the thing to bits (computer joke!). In my experience, carrying the extra weight in a pannier attached to the bike is significantly less noticeable than doing the same in a backpack, so I guess you can consider that an official TFTS recommendation. This joins the list of other TFTS recommendations, that includes: fenders, lights and don't fuck with dump trucks.
Maryland driver, left hand outside of the car clasping a cigarette, Clamato Palmetto sticker on the back windshield, mid 90s Honda Accord. If this isn't a recipe for being passed too closely, I don't know what is. At least it was on a narrow curve going uphill. Wait, no, that's not cool.
You salmon in my bike lane and you're going to get a dirty look and maybe hear my mumble "fuggin (because it really doesn't merit the hard 'ck' sound and actual curse) salmon." Of course, the likelihood of realizing that my invective is directed at the bicyclist and not at, let's say, a poorly prepared fish dish depends on listener comprehension of insidery bike commuting terms. If you jog in the bike lane (in the same direction), you'll probably just get a wistful sigh. If you salmon jog in the bike lane, you'll get an audible and clearly enunciated "ugh." Under no circumstance will anyone get hit or actually yelled at because that's not really my style. Thus concludes the passive-aggressive bike commuter sounds section of this blog.
The thing I love the most about automobiles is their ability to display hilarious (?) bumper stickers. Take this guy: 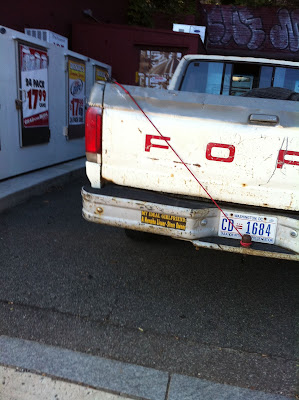 As you can't see from the picture, it says "MY IDEAL GIRLFRIEND IS A NYMPHO LIQUOR STORE OWNER." Hardy har har. As you might be able to actually see from the picture, he's parked outside of a liquor store. So, this begs the question, did he find true love? Or it doesn't beg this question at all. I frequently see on New Mexico a parked car with the bumper sticker "GO TARHEELS! GO AMERICA!" Srsly? Thousands of pounds of vehicle and this your chosen self-expression. Way to go.
Lots of jaywalkers on Wilson. Time to suggest that pedestrians should be licensed and need to carry insurance.
Rode briefly behind a guy in a racer's tuck just coasting along at 7 mph towards a green light on Fairfax. While I appreciate the effort at aerodynamics, it might not be worth it if you're just coasting along slowly. But to each his own. Maybe he was participating in a Slow Bike time trial.