It was a two part trip home. First part here, in under 140 characters, even with appropriate hash tag.
The second part of my trip took my down Wisconsin in a way that seemed somewhat harrowing insofar as it didn't seem to me that various drivers were paying me enough heed. But I can't really control that. It was only for a couple of blocks, until I turned off for 34th and took the bike lane the remainder of the way. That it some ways was better, in that I rode the protected lane for a bit. But, of course, unobstructed bike lanes are contingent on an actual lack of obstruction and one can't always rely on that: 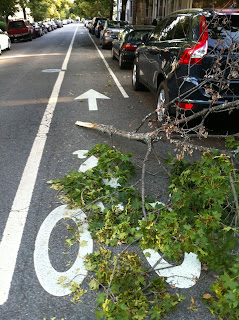 While I paused to take the picture, a number of drivers (two) seemed to have a difficult time figuring out what I was doing and approached me with caution. To me it seemed quite obvious, but I suppose that not everyone assumes that every bike rider is also the 29th most influential local DC bike commute blogger who's taking pictures for his bike blog. I opted not to Cory Monteith Casey Neistat it and just rode around, but smarted nonetheless since I know for a fact that this tree was here yesterday as well. No rush. It's only blocking the bike lane.
When I hit Arlington, I realized that I was sort of rushing, biking along at a pace that was faster than I thought. I kept with that since it seemed to be working for me. I hit the various hills with some pace and that lessened their impact. I was wearing street clothes (an outfit fashioned of asphalt and parking cones?) and that in some ways made me feel more carefree and distracted. This is all well and good for the ride home, but I just don't think I'd enjoy arriving at work sweaty and wrinkled. Maybe if I worked at a Gap.
Cars adorned with a DK sticker might not necessarily be driven by someone who knows how to properly interact with bicyclists. Just FYI on that.
At the intersection of Quincy and Glebe, I said hello to a bicyclist who rode up from behind me. While looking ahead, he rolled up along my side and greeted me with "I have the same saddle on my Surly, except it's a singlespeed." I see. Bike people speak in with strange semiotics and he was clearly trying to suss out whether I was worthy of his conversation. He was sizing me up. I responded, "Oh, so you've got a Steamroller," correctly identifying the Surly model of his bicycle. This, in nature, would be akin to a peacock flashing its plumage or something. [I don't really know much about animals (this was my greatest fear for Jeopardy), so please excuse my shortage of knowledge of all things aves.] He then proceeded to tell me that he alternates between his singlespeed and his other bike, the Specialized something or other that he rode right then, "with gears", depending on whether he goes to the gym. On days with an "hour long" workout, he takes the geared bike. On other days, not that one. I asked him where he rides. He said "to DC." Shifty, this character. I asked him if he rides "up Rosslyn." He said yeah. I shrugged something like "yes, Rosslyn has hills and that must be challenging on your singlespeed bike" without actually saying that. We rode a spot together before he turned into the driveway for the newly built townhouses around the corner from our building. I'd write more about this casual interaction and all of the things that I could interpolate for our brief encounter, but it's really not worth your time. But let's just explore a few things that were presented and the signals he sent.
Thus, I should take him seriously and he's worthy of my time. Bravo, random guy.