After all of the caterwauling, I finally cleaned my drivetrain, in the half-assed is-this-even-cleaner sort of way that I'm so very good at. I had buckets and Simple Green and dishwashing soap and rags and paper towels and brushes and I even wore a shop apron ironically non-ironically. I managed to keep myself relatively clean, limiting my grime only to my hands and somehow the top of my left foot (wtf?), which is no small victory. It did make a difference, in the kind of way that a long overdue cleaning always does. There sure was a lot of gunk in there.
Thanks to my cleaning, I was running late. I didn't wear bike clothes and I opted for a messenger bag instead of the usual pannier. I really, really don't like carrying a bag on my back. I don't find it comfortable and I don't know why so many people do it. Bicycle racks are really great and highly accessible.
Nothing makes my bike make weirder noises than a rushed, substandard cleaning. It's just easier not to brake to avoid the embarrassment. Of course, that's leads to a totally different embarassment.

Apparently, more riders and pedestrians cross the bridge on the downstream side, which isn't surprising, since that's the side that goes down M Street, where there's stuff. You'd only cross the other side of the bridge if you're either heading to that university that everyone hates (via the Exorcist steps?) or that Exxon that everyone hates.
Lots of CaBis out today. I guess CaBi types tend to ride later in the morning. Interesting. Figures that those bikeshare users are hippy slacker layabouts who don't even get to work on time. (Or tourists). 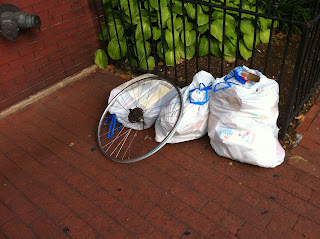 Trash outside of a Georgetown dorm. I imagine this is what Amsterdam trash pickup looks like. Or maybe not since no Dutchman would ever throw out a perfectly good (?) rear wheel.
A bunch of road crews out this morning too. Pretty much every street had some sort of minor, yet totally disruptive construction. Yeah, just because a car can drive over it doesn't mean that your street work is totally cool for everyone. It's not the same when you're riding on a bicycle.