Like most people, I find that when I allow time to lapse, it dulls a little the sting of the immediate and allows me to put things into somewhat better perspective. I feel that this is useful, especially as a bike commuter because slights are plenty and the pettiness of some drivers is abundant and disgruntling and it's best not to think about it too much until some time passes. And really the incident today wasn't the worst and it's almost kind of funny or would be if it weren't so common and wasn't so indicative of the nonsensical environment in which we try to ride bicycles.
The scene: 34th street somewhere between Reservoir and P. I don't know exactly. She was driving (but not really because there was a line of traffic for the next 6 blocks), her silver SUV blocking half of the bike lane. It was enough for me to slow down and even put a foot down and "hop" past as sometimes I do when traffic is sort of tight. I got past and I turned and glowered, as is my wont. Perhaps my glower was angrier than usual or perhaps it just looked that way because allergies has turned my right eye red, which might maybe makes me seem partly demonic. I don't know. We make eye contact. I turn and ride away. And three seconds later I hear "OH, I'M SORRY." I don't think she was genuinely sorry. In fact, I think she was being quite sarcastic about it. I bit my tongue, decided not to say something extra-annoying like "I forgive you" or "Jesus loves you" or whatever else kind of asshole thing I could have come up with in the spur of the moment. I mean, what did I expect? Her to be able to control her automobile, the vehicle that she has sanction from the government to operate based on the completion of an examination? That's crazy! Cars basically drive themselves and you can't control them- I think that's what power steering means. To ask a driver to demonstrate the barest modicum of awareness concerning lines of paint is like asking a poodle to not take your sock- it's just not happening. And yet its the bicyclists who need to behave responsibly. And the bicyclists who have no respect for the laws. Drivers are given the entire road except for a couple of feet, but that's just not enough. It's gluttonous.
But I rode on. Because I wanted to get home because I had stuff to do.
I saw this very small bike. 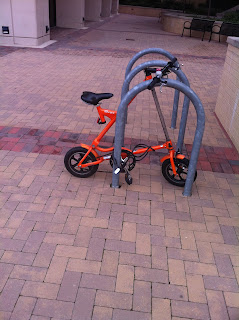 I'd like to see Tim, the most blogged about bicyclist in DC, on this bike. [Tim is very tall and the juxtaposition of his lanky frame on this very small bike would be amusing. Yes, I recognize that this, thanks to the explanation, isn't funny any more, assuming that it was funny or maybe chuckle-worthy in the first place. And yes, I stopped on my ride home in order to take a picture of this bike simply in order to point out that it would be amusing if a very tall person, like Tim, rode a very small bike.]
FedEx driver let me ride past in the bike lane rather than making a right turn into me. I said thanks. As I passed, a guy jaywalking said something like "no fucking around here" and I said "what?," unsure if he thought I was fucking around (I wasn't. I just didn't want to get hit by a truck) or if he thought the driver was fucking around (I don't think so. I just think she didn't want to drive her truck into me) or if maybe he was just addled. In retrospect, I've settled on addled.
Guy, roadie-light type, rode up behind me at Quincy and Glebe. He, correctly in my opinion, stopped behind me, rather than riding around. Be the change you wish to see in the world. I'm basically the Gandhi of bike commuters. I don't know where he went because as I rode down Henderson, he wasn't there, but I don't know where he turned. Phantom polite biker. Figures.
Programming note: I'm off next week. I might post but it'll be about things other than my riding in and home since I won't be. As usual, if anyone wants the (virtual) keys to this bad boy and its dozens of highly discerning, extraordinarily attractive (I assume) readers, let me know and you can post your rides. Also, go to the Capital Bikeshare birthday party. I can't believe it's been a year.