Have I thanked you all for reading lately? If not, thanks. If so, thanks again.  If it's unclear or you can't remember whether I've thanked you, either individually or collectively, well, you're probably over-thinking it.
I don't know if it's my hardy constitution or just my accurate reading of the morning's temperatures, but I'm still wearing short sleeves. And shorts. I'm still "rocking" what I would wear to work in the summer and that's working out for me. I suppose I could wear a long-sleeve shirt and still be fine, but it doesn't seem that cold yet. In comparison, I saw a dude wearing ski goggles. It was, like, maybe 60 this morning. Maybe he's one of those Dubai skiers.  I'm of the opinion that you should wear whatever allows you to get on the bike (including goggles, parkas, mink stoles, chaps, whatever), but I just don't want to feel like I'm outside the norms of the average bike commuter in my attire.
I also saw a guy with his tie tucked into the front of his shirt, which I don't think I've ever seen before. I don't wear a necktie while riding my bicycle (I opt for an ascot and smoking jacket), so I haven't had to consider the implications of "rocking" this look, but I don't think I've seen anyone elect for this specific strategy before. Maybe it was a frightfully long tie and he was worried it would get caught in his spokes. I suppose if I had to daily wear a tie at work (instead of a blimp captain's uniform), I'd probably just wouldn't put it on until I got to the office or maybe just put it on and wear it untucked, allowing it to flap in the breeze like Old Glory (all of my ties have American flags and/or bald eagles on them) because a necktie really isn't that much of a hindrance to bicycle riding. But then again, see the first clause of last sentence of the previous paragraph.
If you time the lights right, you can ride almost the entirety of Pennsylvania Avenue without stopping. I suppose you could neglect the lights and also ride the entirety of Pennsylvania Avenue without stopping, but in that case, I couldn't guarantee you wouldn't be hit by a turning car. I think it's important to use bicycle infrastructure when it's there, provided it's not too much of a hassle.
You like pictures of tents obscured by cars? 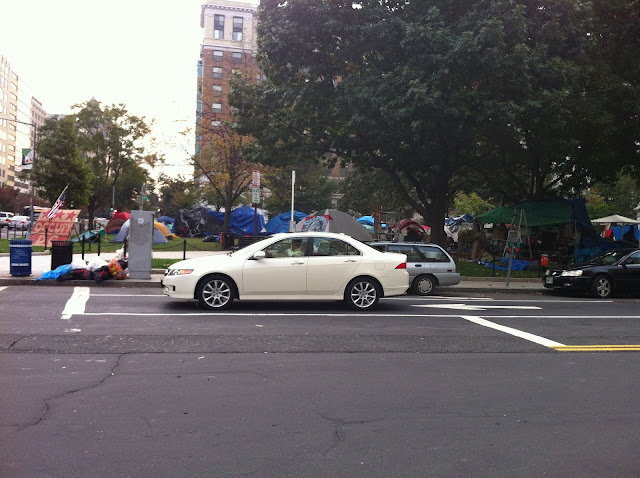 It's like a cross between the LL Bean and Urban Outfitters catalogs. I think that the protesters will remain safe from the park police so long as they don't start occupying pedicabs.
Rare downtown superbiker sighting. He must have been heading home from Hains or some trails because I don't think riding 15th in the morning would be very good training, at least not if you're training to go fast for long intervals. If you're training to avoid turning cars and dodge pedestrians (which, come to think of it, might be a good idea considering how recent TdFs have gone), then I strongly recommend it.
I love when on-street parking takes up enough of a lane that it can't be used by cars, but it's still wide enough (and even wider than a bike lane) to be used by bicyclists. I have very mundane, specific passions.