Not much better than a Friday ride home. Did I say that last week? Maybe.
I rode behind a woman uphill on Mass before Wisconsin and her rear fender was yellow and bent. Later, she passed me on the downhill on Mass while I was waiting in car traffic and she was riding on the sidewalk. I'm fairly certain that I'm (and by extension, all bicyclists) are slowed more by car traffic than the other way around. I don't have so-called "statistics" to prove this, but I think it's probably true. I mean, if I slow down a driver, most likely he's going to pass me. He loses like 2 seconds. But when there's masses of cars blocking the way, I can either filter around (which means going slower), ride on the sidewalk (which means going slower) or waiting in line with the cars (which means stopping).
The results are in and the bike mysteries have all been solved. I'm glad that he included a picture of me on my brand new computer. 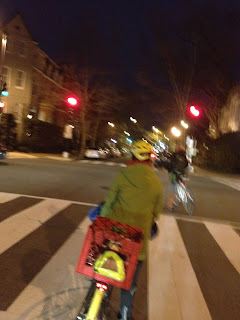 Some other thing happened. I saw a woman on a bike on Q Street and she had bar mitts and was wearing duck shoes. This picture shows neither, really. Anyway, I liked your winter bike attire, if attire means bar mitts and shoes. Maybe someone can review duck shoes. Or lobster gloves. Or anything that can be used when biking that lis named after an aquatic-ish animal. The other bicyclist in front had shoaled me two blocks previous and then shoaled this woman. I guess she was in a hurry to wait at the light marginally ahead of us.
At 11th and New York, I pulled into the right lane to wait behind a white truck. I didn't jump the queue. The light turned green. The truck didn't move. I guess the truck was just parked at the corner. That inconvenienced me. I moved left and snuck in between a bus and big white delivery van. Sort of sucked.
The ride home seemed generally less laborious. Rides home always do.
I think that I might have irreparably burned some bridges with the woman who rides the blue Electra Amsterdam that I've mentioned before. And it really wasn't my fault. I rode behind her on East Capitol for maybe 10 blocks or so until she turned somewhere and as I rode by I said "I like your bike." She turned and said "You WHAT?" as if I had said something untoward and offensive. I save my untoward and offensive comments for friends and family, thank you, and would never direct them towards a stranger who wasn't driving a black BMW. I sheepishly, but perhaps more clearly, said "I like your bike." You should never compliment anyone about anything. Anyway, if you're reading this, that's what I said.
Then the grocery store.
These are Hungry Man Pub Favorites. I noticed them when I was waiting in line. If your pub is preparing meals for you by microwaving tv dinners from frozen, you should probably go to a new pub.
Then home. Then tuxedo delivery.
I'd like to thank P. and his family for their generosity. Thanks.
Have a nice Saturday. Sunday, too, if you feel like it