An update on the biggest story of the day from #bikeDC. According to those who know, or at least according to the librul media (so take it or leave it), it looks like the bicyclist involved in the crash this morning at 11th and U has serious injuries, but perhaps less serious than initially believed and even non-life-threatening. So, that's good. Once again, I advise you to avoid all comments left below this or any other bicycling story, unless you have a stronger stomach than mine. And whatever happens after the police inquest (do we have inquests in this country or did I pick up this terminology from a cop show on BBC?), the axe grinders and yahoos will still be there, so don't go searching for vindication, no matter your point of view. Because really, why do that to yourself?
Back to your regularly scheduled program, namely, my bicycle ride. I feel like it might as well be in reruns. There was plus change-ing and there was plus meme chose-ing. There were drivers of BMWs driving hilariously. There was me, biking, and wondering how little space I'd have to take up to convince people that it's not me that's the reason there's traffic. Spoiler alert: it is not possible. My favorite is when there's a driver looking to make a left turn in the left lane and there's me in the right lane and I perceive that it's somehow my fault that things have slowed down. Perhaps I'm being oversensitive.
This is new. Blocking the right turn lane on Mass where a right turn isn't even allowed at that time of day. I don't know if this is redundant or actually useful.

Some day I'm just gonna take 23rd street out of Sheriden Circle and ride to Washington Circle and then ride back up New Hampshire to Dupont Circle and then ride down Mass to Thomas Circle and then take Vermont to Logan Circle and then ride straight out of town and never come back because I'd be so sick of bicycling through traffic circles.
Mr. Red Pants, are you out there? You rode past me when I stopped at a stop sign at Q. You said "on your left." I got that, but I wasn't expecting you to ride through a stop sign on my left, one that I stopped at (and by stopped, I mean slowed for) and then wend through some pedestrians at various crosswalks along the way while sort of waiting for red lights, but not really. And then for some reason, you decided to cross to the other side of the street and wait in front of the driver who was wearing a tuxedo (for real) rather than wait behind the woman in the dress that might have been a shirt and the leggings and the boots. I don't know where you went after that. The dress that might have been a shirt woman crossed 11th and probably proceeded down Q, but I didn't, so I don't really have much to add. Good amount of bike traffic on 11th, all heading the other way.
Through downtown was what it was (I've take my Nobel for literature please) and I spent much of it right off the bumper of the SUV in front of me. I crossed into the Pennsylvania Avenue cycletrack from the sidewalk, where I stopped to wait for the light to change, and I tried not to overdramatically sigh my way in front of the guy who blocked the crosswalk with his car. I might not have succeeded.
Fewer lightless cyclists out tonight, which is good. And a little ironic, since I rode home earlier tonight than yesterday, when it was much darker. It's really not difficult to have lights on your bike. I promise.
What's your favorite scold for someone jogging in the bike lane? I've never actually said this, but I think mine would be "Nice bike!" Of course, I don't say stuff like that because I've made it through life thus far without being punched in the face and I'd like to keep it that way. Helmet isn't going to help that.
I rode behind one lightless woman who bipped and bopped through the bike lane on East Capitol and when some driver eventually blocked her path, I had already moved over to take the lane and I said something like "you can come over" which she didn't, but didn't really acknowledge. Umbrage: activated.
And then the guy in the Arsenal shorts decided that he would ride in front of me as I waited at the red light at Lincoln Park. Why? Some day I'll muster the effrontery to ask. Why does everyone think that they're so freaking important? Oh, it's DC? Sorry. Forgot for a moment. Do the same people shove their way to the front of the Metro line? Funny thing about pet peeves: they're actually like pets. You get used to them after a while and no matter how annoying they are, you're attached and you just can't get rid of them. I don't get what's so hard about waiting behind someone, but I suppose I should just stop caring. It could be a long spring and summer.
I stuck behind Arsenal shorts along Kentucky until I got to the store and then I shopped and then I went home. Ellie the Poodle, the original pet peeve, was there: 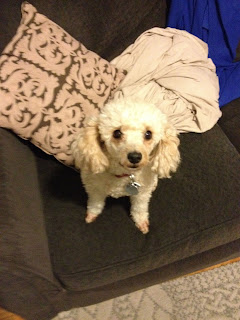