Is this schtick getting tired? Should I blog about something else? Because I've got a lot of other ideas. For example, maybe I have important things to say about TimberSports. Or the shoes that foreign celebrities wear to international film festivals. Or maybe I could answer your gardening questions in the persona of an 17th century yeoman farmer with a penchant for brandy. Like, I said, I've got a ton of great ideas for blogs and I'm not wedded to this whole bike commute blogging thing. Sure, I'll still ride my bike to work, but maybe after eating my lunchtime sandwich, I'll instead post pictures of fish dishes from Malaysian cafeterias on my tumblr instead of rehashing that time that driver was a jerk or that bike lane ended abruptly. Or how tonight's commute prompted me to muse on moral perfection, namely the process by which one becomes more virtuous, especially in the area of patience. If we are to believe that one's character is mutable and that it can be changed over time through a certain set of actions and through some kind of focused self-improvement program, then I'm forced to wonder if patience can be gained through the simple act of traveling by bicycle. I think when I started bike commuting, I was a fairly patient person. (I do own an apricot poodle after all, the most mischievous kind.) Nonetheless, I think the act of daily riding my bicycle has provided me much needed additional perspective on the world around me and on the nature of social interaction and modernity and on the doofy hats that some people wear. I don't think it's necessarily the action of traveling slowly (slower than a car and slower than a bus, ceteris paribus) that has somehow induced greater feelings of patience. If this were true, drivers stuck in traffic, who barely move forward, would be the most patient of all of us and I'm sure that's not the case. What, in my opinion, has made me more patient is the kind of immediacy I feel with my surroundings. Rather than passing through a space and not truly being part of it, on a bike I'm fully enveloped in the here-ness of everywhere I go. Patience, after all, is a virtue that's all about relativity. An hour is the same amount of time for the impatient person and the patient one, but the two people cope in very different ways. Like everything else (including blog writing), it's about expectations.

I've ridden past it every day since and I've yet to notice either support rally or protest rally outside of the Luxembourg Embassy related to the Fränk's positive drug test. This is what the Duchy's embassy looks like. Normally when I ride past the embassy, I drop my chain in Andy's honor, but now I'm just going to start taking banned diuretics.


Mass to Q. Same as always.

I rode past the Jewish Community Center at 16th with an above-the-fray, bemused smile. I normally drop the smile when I cross 16th because there's a parking lot behind the JCC and it's one of the most dangerous places I pass on my route. The lot is up a slight hill and there's almost always a driver pulling in or out and the driveway entrance is between parked cars, so the visibility is limited. There's also some street parking spots right there with high turnover. Bike lanes really don't mix well with streets that have lots of curb cuts.

Traffic Control Officer at 11th and Massachusetts and L and L. 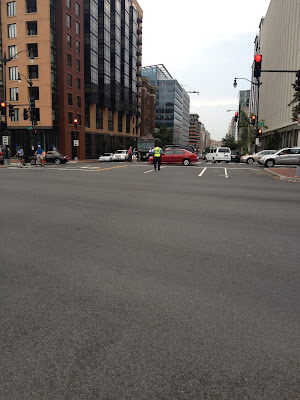 Normally, technological solutions (such as traffic lights) have a negative impact on certain kinds of employment. Not here. He was doing a great job and for the most part, drivers actually did what he directed. It seems like a Sisyphusean task, though. It must appeal to a certain kind of person to stand athwart history traffic yelling stop. At least you get a vest, like a croupier. Only in very dark casinos would a croupier need a reflective vest. And while a croupier might hear "hit me," the Traffic Control Officer must be aspiring to the exact opposite.

The downed bollard at Penn and 7th was replaced some time today. Thanks, DDOT. It's part of their "broken windows" strategy of bike infrastructure. I don't know if this a real thing or if it should be. Frankly, I'd prefer a bolder strategy of enforcement, perhaps involve SWAT teams and helicopters, but I've always had a flair for the dramatic. A flare for the dramatic might be useful in alerting a search party made up entirely of actors.

I watched a guy in a suit try to hard to bike in circles rather than just stop and put his foot down. Believe it or not, those striped areas on the road aren't exclusively meant for it. As I watched the guy circle, another guy, he on a Furley, shoaled me on the left. "Hell hath no Furley like a Raleigh scorned." Ok, that makes no sense and I'm trying too hard.

As I nearly rode into a group of tourists who were in the process of moving out of the center of street into my path as I tried to pass them on the right, I said "Please. Excuse me." I'm not sure they heard the period. This would have been an exceptionally bad crash and I'm glad that no one walked into me.

I stopped at the store and I bought two things and it took 20 minutes at the self-checkout line. Sometimes you just get in the wrong line.