I headed down Loughboro and then hung a left onto Glenbrook, which I think turns into Macomb near or after Macarthur Boulevard, which I also crossed and then it was down the staircase to the Capital Crescent Trail. At the base of the stairs stood a deer and the deer was just kinda looking at me and I said "hey buddy" in the way I might say hello to a dog that looks friendly. I tried to take a picture of the deer, not only for my collection (I have albums and albums full of deer pictures. It's weird) but also as a way to share with you my seeing this deer, perhaps so you might be more inclined to believe me or maybe just so that you become slightly more interested in this story, but, per usual, my pictures were crap. The deer stayed still as I remounted my bike on the trail and seemed as ambivalent to my leaving as it did to my arrival.

Less than a mile down the trail before the bridge over Canal Road, there was a mountain bike lying on its side and two people gathered near by, so I stopped to ask if they needed it since bikes (like deer?) don't frequently tend to be supine in the wild. I then noticed that the two people, youngish and in normal clothes, were talking to two older men, pudgy and outfitted in the beige garb of boy scout troop leaders. Baseball managers and boy scout troop leaders are positions that undermine their own authority through ridiculously infantalizing uniforms. One of them, the leaders, said something like they were looking for direction (not directions), but at the same time waved me off, so I left and I suspect that if any Mormon missionaries were to bike by, they'd have made some easy converts.

Performance Bike should set up an outlet at Fletcher's Cove. Such is the sartorial sense of the CCT commuter.

A little farther down the trail, I came upon two roadies and at first I stuck behind them out of deference to the idea that maybe they would ride at a pace that I could safely trail, but after a little I figured that I'd be much happier if I just passed them, which I did after dinging. There's nothing wrong with passing and nothing wrong with getting passed. It's not a moral judgment in either direction.

I took the Rock Creek Trail past the beach volleyball courts and I was briefly distracted in trying to see which of the shorter men would attempt and fail to spike the ball and I drifted over a little and got a nasty scowl from the bicyclist coming in the other direction. Sorry, dude.

My chain slipped as I made a graceless and bumpy transition from the trail to Ohio Drive. Here's what that looked like:

I moved my bike over and was promptly honked at by a guy trying to park his car in the parking spot that I was occupying as I undertook my two second repair. Rather than tell him to sod off, I just moved back onto the sidewalk. The car parking situation on Ohio Drive (free, 2 or 4 hours at a time) is the greatest deal/scam in all of DC.

This is the Jefferson Memorial. RIP Sherman Hemsley.


I don't think I've ever bothered coming over here since we moved back to DC and it was a fine day for a diversion and there were only a few people around and it was a beautiful, if too warm day, and I found out that this is from where the NPS weekend bike tours of the Mall start:

And more picture picture of the Jefferson Memorial area: 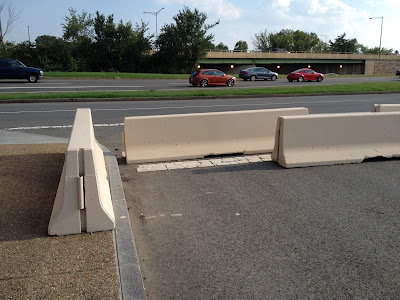 If we are going to trade liberty for security, liberty being the ability to drive as close to places as possible, can we at least do it in a more aesthetically pleasing way? The marble of the Memorials to our nation's leaders juxtaposes nicely with the concrete barriers designed to protect them from cars. I look forward to the day when the various statuary around town is fitted with bicycle helmets for their own safety, as well.

I took the ART to 7th Street and then up to I to over across South Capitol into Near SE and New Jersey Avenue. At I SE and New Jersey, there's some demolition going on which will result in a new development at some point in the next couple of years and more importantly the extension of the I Street bike lanes, which would maybe then allow them to connect to the lanes at 4th and 6th SE and better connect the Hill with the Riverfront and maybe make it marginally easier for me to bike to theoretical baseball games (Theoretical Baseball is even more popular than Fantasy Baseball).

New Jersey to E to South Carolina (which is certainly wide enough for bike lanes) to awkwardly standing on a crowded sidewalk waiting for the light to change on Pennsylvania Avenue to antagonizing the pedestrians who crowded around me when I tried to get my bike past them and then up the cobbled South Carolina Avenue on the other side of Pennsylvania to 15th to home. It was a good ride, one about 50% longer than my usual ride home and I logged it for the 2milechallenge and I would encourage you to continue to do the same.