Ride Home 8/10: Sea Urchins: The Urchins of the Sea

My clothes were still wet. However, for some reason, there was a box of free shirts in the hallway by the copier and there happened to be one is my size, so I took it and I wore it on my ride home, along with my work pants and my work shoes and I didn't have to wear wet clothes, so huzzah for all that. It was a hot afternoon, not sunny but bright and it was humid to the point of mild discomfort. The shirt wicked moisture well. I guess I haven't really thought about it until now, but I don't know why there was a box of shirts labeled free in the hallway. But you should never look a gift shirt in the... neck hole?

I jaywheeled through a bunch of red lights. My law is the law of Idaho. I'm all state's rights like that. Sorry.

Got passed by the driver of a 90s era model of Ford Sedan. He gave me just enough room, but he didn't seem happy about it. Here's the deal: if you're somehow opposed to or uncomfortable with sharing the road with bicyclists, stay home. Or just drive on the highways. Times, they are a-changin', which I believe is a famous line from a Jonah Lehrer book. City streets belong to the people and people want to walk and bike and even pogo (lame) and that's pretty much the deal, so it's time to get over it.

I accidentally shoaled a dude, but he shoaled me back, so there was karmic justice or something. He turned off somewhere up on New Hampshire Avenue, but I stuck to Q and took it the same number of blocks I always take it. At 11th, I barely missed the green light, but turned right on red and then the counter showed 3 at Rhode Island, so rather than race, I stopped. I was looking down at my phone (I was trying to coordinate dinner ingredients with the Official Wife) when I heard the horrible thudding noise of two cars colliding one block in front of me. At first I didn't see the issue, but the light changed and I biked forward. There was a pickup truck in the intersection, pointed diagonally toward the curb in the direction of the Greek restaurant. The driver was still inside and the gathering crowd was beseeching him to leave the cab of the truck. I couldn't quite tell what he crashed into. The truck had a DC flag on the side. It was a government truck, probably DDOT's. The crowd continued to suggest that he leave the cab, when one guy from the corner walked out and tried to open the driver side door, which was stuck and then he told the driver, an older gentleman, to get out on the passenger side, which he did. I biked up another half a block and saw a grey minivan, askance in the bike lane. The damage to the van wasn't at first apparent, but when I passed it, I saw how bad it was. The driver's side of the van was crushed inward, the curtain airbag had deployed and the driver was a shaken up younger woman, who kept looking at her hands. There were no visible signs of injury to either driver. Here are some pictures:

This was my first time calling 911. The operator was curt, efficient, patronizing, thorough, unpleasant, impatient and helpful. The police were deployed and I didn't know what to do, really. I stood around with the gawkers, but I didn't approach anyone. When I heard sirens, I left. I was an ear witness, but I didn't see the event transpire so I felt absolved of responsibility to suggest to any official as to what had happened. I heard one of the gawkers say to another than someone went through a red light. I guess. I was glad that I called 911 because I'm not sure that anyone else had. I also tweeted to DDOT because I'm a social media maven or whatever.

Car crashes are a strange thing to come upon as a bike commuter. It's a terrible reminder of the weight and momentum of the vehicles with which we share the road and the damage witnessed provides a visceral jolt of the implications of what happens when things go wrong. I don't think either driver was injured and I'm glad for that.

After the crash, there wasn't much eventful going on. Spurts and fits down 11th and then Penn and slower going than usual up Capitol. Some days it takes more than others to make the pedals go round. I blame gravity. Some guy on a mountain bike decided that he wanted to race me, or at least that's what his multiple looks back over his shoulder suggested to me and if he was racing me, he won. I saw this guy:


The guy immediately in front of me is the guy who wanted to race me and the thing that looks like a camouflaged banana is some kind of recumbent or velomobile and I wasn't the only one to take a picture. A pair of accented tourists approached at the intersection between the Library of Congress and the Folger Shakespeare Library and one asked "Do you want a picture?" asking, I think, if they had his permission to take a photograph. He assented. I don't know much about the velomobile driver, except that he wore white sneakers that reminded me of the kind that my college roommate used to wear.

I stopped at the store and got some broccoli and cake. On the way there, I saw this neo-Pennyfarthing locked up outside an apartment building on Kentucky. I actually went back to take a picture: 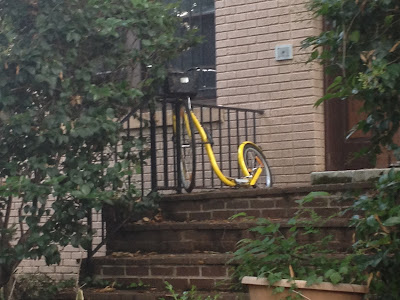