Ride In 8/13: More leeks than a potagerie

The guy who overtly raced me on Friday was on East Capitol at the same time that I was and perhaps unbeknownst to him I was onto his game this time so I secretly, but somewhat nonchalantly, raced him and I beat him and now we're tied 1-1 and I don't know if this is a best of 7 series or if we're going to have to play out the whole season. I'm sort of hoping that Nate Silver just runs like 10,000 computer simulations so we can find out who's "better" at "bike commuting" without having to repeat this process 9,998 more times.

I made a left onto 3rd NW and rode past the east side of the east wing of the National Gallery of Art before stopping at a ludicrously superfluous stop light at Madison Drive, before turning right onto Madison and following it along the Mall, past the various Smithsonians. Fun fact: Madison Drive, as we're well aware, is named after every five year old girl you know.

There was a guy doing push ups outside of the west wing of the National Gallery of Art, perhaps aspiring more for Praxiteles than Botero. Maybe he body is a temple and he wants it to fit right in with the silly faux Classicism of the National Mall. Maybe he was listening to classic rock on his iPod. Classic Greek rock.

There are signs along the Mall that indicate the parking policy thereabouts and on Jefferson Drive, one side of the street is restricted to permits and the other side is free with a three hour time limit. I think that this is bad policy for any number of reasons. The confusing thing, though, was that the signs also indicated that parking was prohibited Monday-Friday from 1AM-10AM, but there were plenty of cars parked. Does Monday-Friday not mean the Sunday night going into Monday morning? Or is parking on the Mall plagued by lawlessness? Maybe Congress should have a hearing.

I rode down Jefferson and then around the Washington Monument and then across 17th street because I wanted to check out the new and improved Reflecting Pool, which I thought was once again full of water and reflecting things. Rather than reflecting, I was rebuffed (The rebuffing pool is a totally different things) and "nearly ready" doesn't actually mean "ready" and I should read things more closely next time. Here's what it still looks like: 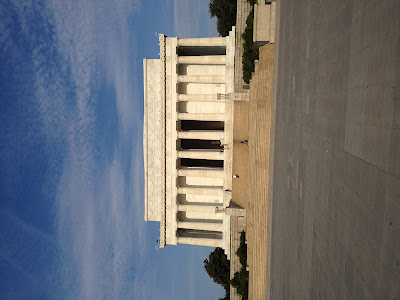 I rode over to the Rock Creek Parkway Trail and the Park Police were engaged in some speeding enforcement activities. The drivers who got got did not look happy. I think this is just yet another reason why we shouldn't have any parks. You can't have a park without running a road through it and you can't turn that road one direction during rush hour without people thinking that it's ok to drive faster than the posted speed limit and you can't enforce speed limits on one day when you're not going to enforce them on all of the other days, so ipso facto, it's time to pave Yellowstone.

After the trail, I rode for a couple of blocks on K Street and rode up Thomas Jefferson (making that my third President street after Madison and Rock Creek Parkway. I'm just assuming that we're not too many years away from "The Rock" being elected President and then getting the parkway "renamed" for him) past Baked and Wired and its pink decorative bicycle of which I have no picture. I took a picture of the building of the Junior League of Washington, which I believe alternates with the American and National leagues in determining who hosts the all-star game. If the JL hosts, you know there will be enough tea sandwiches. 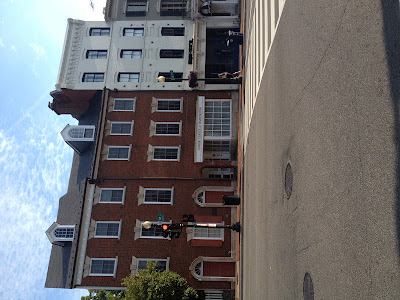 M Street to 31st and I rode 31st uphill to R, which makes for a nice, but somewhat boring, alternative to Wisconsin Avenue. I mean, it's not boring if you like looking at mansions and fancy houses. It's a fairly untrafficked street and quiet too, so the ride was free of dispute and hassle and I recommend the road for anyone looking to get from M Street to R Street in East Georgetown. So that's like a recommendation for maybe 6 people.

I decided to take R Street across Wisconsin and then along my old, old route through Glover Park. The horrible intersection at 37th and Tunlaw will soon be changing (for the better) and I wanted to pay my respects, which mainly consisted of my rolling through the stop sign on my way up the hill and to the left.

I passed a woman standing outside of the Russian Embassy who had sunglasses the size of saucers.

Whatever happened to the bike lanes on New Mexico Avenue? They sure never got installed. ANC 3B, where you at on this?

Another great ride and another great day for it. Fall is right around the corner and you can feel it in the air. Ok, not really, but it's nice to be optimistic.