If you've always relied on the kindness of strangers it's highly unlikely that you've ever been able to cross the street.

Same route home as always, except maybe this time with a little bit more verve and a little bit more caution and a lot more drivers driving in the bike lanes. Could it really be so hard to keep one's car out of the bike lane? Maybe it is. I don't know. When I drive, to the best of my knowledge, I don't drive in bike lanes, but maybe that's not the case and I'm just as horrible as everyone else. What if the outside of bike lanes were divoted like those highway rumble strips? That sounds like a fairly inexpensive solution to the problem of drivers "inadvertently" driving into bike lanes. Just throwing that out there.

It behooves the bicyclist to occasionally be a bit forward and to take the lane when the situation calls for it. It might be one of the hardest things to learn, but it's one of the most valuable. The best way to get around a car parked in the bike lane is to shove your hand out, look over your shoulder, move into the travel lane and just get on with it. It doesn't always come naturally, but it's just the way that it works sometimes. That's some trite advice.

Guy on recumbent-type bike at 11th and Mass:


Then some traffic at 11th and New York:


11th is a funny street. South of Massachusetts, there are no bike lanes. Instead, the cyclist is asked to weave through ludicrous traffic or wait amidst it and the road conditions are horrible and there are many bus stops and underground parking garages and there are grates and manhole covers and it's one of those streets where the number of users (pedestrians, cyclists, bus passengers, drivers) are not adequately represented in the amount of road space given (almost all to cars). But such is the way of the world, I guess. I don't see this problem getting any better once City Center, and it's 1800 new parking spots, opens. There's actually a banner on the side of the construction site that advertises the number of parking spots that the development will have. I heard the Egyptians did the same thing at Giza.

I saw Justin in the Penn Ave cycle track on his way off to Crystal City to visit their farmers' market. I was off to another farmers' market (at Eastern Market) and we talked farmers' markets and bike stuff and it was nice to chat for a while and I wonder if he made it there and back before the rain.


You can yell "stop," which I did, and you can hope that a driver making an illegal left turn on red stops, which he did, but you can't know if your yelling is what prompted it. When I passed the driver, who had stopped in the middle of the intersection, I slowed, deliberately, and I didn't make eye contact, deliberately, and that was pretty much what happened. Did he feel chastened by my iciness? Unlikely.

There's a parking lot between 3rd Street NW and the traffic circle at First NW and Pennsylvania Avenue and this parking lot is controlled by the Senate Sergeant at Arms, allegedly, but it's also a popular place for drivers to slow down and have their passengers take pictures of the Capitol while the car is still moving or maybe parked. Please, I beseech you. If you come to Washington to see the sights, please at least get out of your car to take your pictures. I can't promise that it will be worth it, but I will promise that I won't deride you if you do. Is there anything more American than the drive-by photo-op? Sigh.

East Capitol to 7th Street and then I stopped at the farmers' market to buy what I thought was an heirloom tomato (it was a pepper), some cherry tomatoes and some squash. I purchased these vegetables from the Amish. Here's an Amish child: 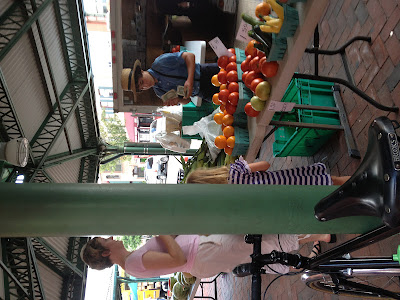 I only buy locally sourced organic vegetables from authentic artisanally crafted, behatted children. That lady and her kid, on the left of the picture, had left their baby carriage (and baby!) in front of my bike, thereby blocking me in. First time that I've ever been blocked by a stroller. It was cool and she apologized and made some sort of self-effacing "OMG who abandoned their baby" joke but it was no big since I knew exactly who abandoned her baby and she didn't even abandon it because she was like three feet away buying tomatoes from the Amish.