What more is there to say about driver's who change lanes without looking? I'm fairly sure I've commented on the overall suckitude of it. And the recklessness. And how I don't very much enjoy having to swerve out of the way because a person was incapable of looking in a mirror. People love looking in mirrors! That's why we invented mirrors! And before that we looked into pools of water (as opposed to pools of what exactly?) and yet the narcissism of the driver and the self-absorption (perhaps of paper towels in the pools of water?) gives way to a mindless "MUST NOT BE NOT MOVING" which in turn, with a turn of the wheel, doesn't give way to me as I turn my wheels, doing what I can to avoid lying in a pool of a different sort, reflecting on what went wrong and mirroring the pose of someone unmoving. But other than all that, what can be said about drivers who change lanes without looking?

You say bike lane, I say bike lame. Ok, I don't say bike lame. I like bike lanes very much, but sometimes they're lame, mainly when they're blocked and occupied or blockuppied, which I think is what happened in Lego Land. We are the 99% assembled. I don't like when I feel hemmed in within a bike lane, a rider in front of me and car traffic to my left. But these things happen and there's no reason to attempt a "sidewalk skitter" or another silibant bike maneuver. Sybil, unlike Narcissus, would have recommend a different route home.
I liked a bumper sticked I saw. It said "Put the phone down so no one gets hurt," echoing a line like something you'd hear in a hostage-taking movie. Clever. The driver of the car had one hand off the wheel to hold a large iced coffee.
Usual crosstown and then down 11th and I passed some buses and some cars and some taxis and it was marginally fun, but still worth smiling over. There's no reason to treat each bike ride like it's a battle or stressful or fraught because even when it's bad, it's still pretty good. You're outside, you're getting some exercise and you get to travel at a pace where you can notice stuff, like leg tattoos on the bicyclists in front of you. I don't have a leg tattoo, but if I did, I think it'd be the words "reattach if found," though that seems a bit macabre. Maybe it just be a a New Yorker cartoon because then the people behind me would really get to think and maybe even kinda smile a little, but not actually laugh.
I rode up the House side again and then down Pennsylvania Avenue because I had to go to the South East Post Office to pick up a package that couldn't be left at my house. I thought I knew where the Post Office is and I did, but for some reason I turned too early and ended up riding down Pennsylvania Avenue on the sidewalk for too many blocks and I felt awkward about this and I'm sorry for everyone I inconvenienced. I went very slowly, much like the line at the PO. I won't disparage my time there, but I will disparage what happened to my bike when I got back outside. If you have young children in the room or are afraid to look at GRAPHIC images, please look away:
There was another bike there when I locked up and apparently the owner couldn't extricate his bike without knocking mine over. I have a message to this person. I will find you and I will have my revenge. It will probably involve my hiding lunchmeat somewhere on your person or property. Because then you'll find it and maybe eat a sandwich and I hope that sandwich gives you heartburn.
Never order an umbrella over the internet. 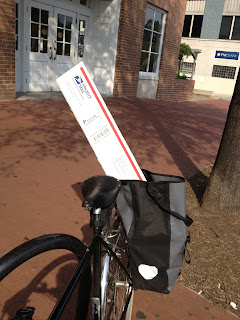 I made it two blocks before it started to fall out. This was dumb.
This is what freedom looks like. The high cost of flea parking.
Once the package fell out of the bag, at the intersection of North Carolina and 7th, I decided that I would just hold it and I felt very much like I was jousting. I would not win the jousting bounty, for I am not brawny. (that's a paper towel callback). BikeJoustDC is a fun new social club that combines the best elements of biking, jousting, and hip, young, fun people who can do neither very well. It's like bike polo, but so much better.