I'm writing (or at least starting to write) this post from a bench in the back of the bike shop as I wait for Kirby, my "delicate flower" Brompton, undergo minor surgery- the replacement of his right pedal. It had been clicking for the past two rides and I learned that he had a busted pedal bearing. Poor little guy.

I've since left. Everything is better now. The remainder of this post was written from my couch at home.

Last night I didn't ride Kirby. The ride itself wasn't super memorable, hence my lack of super memories, which are like regular memories, but in them everyone is wearing a cape. I had left work earlier than usual because I had to get home to take care of the dog (EtP) prior to heading back out again to spend the evening with my wife and a former UN Secretary General (SPOILER ALERT: Not Javier Perez de Cuellar). Traffic seemed lighter than usual and I rode through Dupont Circle to 19th Street, a street that I'm really coming to love. Sure it's full of buses and drivers who aren't looking for bicyclists and pedestrians who see bicyclists but ignore them anyway, but it seems like a pretty direct and fast way to get from north to south (carpetbagging?) if you're willing to mostly mix it up with traffic for a couple of blocks, namely between L and Penn.

Down Penn and past the White House and then down 15th and on Penn again across town to the Capitol. For as 'bad' as the Pennsylvania cycle track is, I sure love it. I don't know if that's Stockholm syndrome, the soft bigotry of low expectations or if I've got a real deal Petrarch-Laura situation going on. I don't know if I like riding in the bike lane in spite of its flaws or because of its flaws or whether it has nothing to do with it's flaws (or flossing) and everything to do with the fact that I get to ride past fancy and important buildings while looking at other fancy and important buildings, all within the relative safety of a somewhat separated bike lane. Look at me, all waxing and stuff.

I rode up Capitol Hill (fun fact: somewhat hilly) and down East Capitol. Little doing. I then took Bikeshare back to the thing (thing being the word I use to describe the thing I went to with the Official Wife) and then we rode home together on Bikeshare. We rode past Union Station, which was (and is still) in the process of being striped after being paved. There will be bike lanes! And this is fantastic! And I will add one more sentence just to use one more exclamation point! Though, I've got to admit that I'm going to miss (sort of) the wonderful and terrifying affair that was riding through the bumpy, ruddy, complicated mess of lanes that was the old Columbus Circle. But my missing it is nothing in comparison to the vast utility of bike lanes, and maybe even some bollards.

Here's a picture of the soon-to-be bike lane. I saw it this morning:

This is the west bound lane. It'll be on the very inside of the travel lanes, next to the brick plaza nearer the station. The bike lane starts after the intersection with Massachusetts and 2nd Street NE and it ends at the Met Branch Trail entrance at First Street NE, rather than continuing on down Massachusetts. So it's kind of a bike lane that appears from nowhere and disappears from nowhere, which isn't exactly great. But when the First Street NE cycle track qua Met Branch Trail (yeah I used qua. what are you gonna do about it?) is completed, it'll make a little more sense. The eastbound bike lane doesn't hug the curb like this one does, instead existing between the right turn (?) lane and the central travel lane. Here's what that looks like: 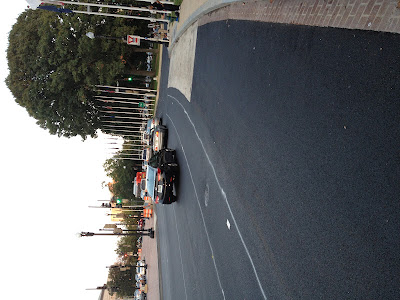 I'm ready for both of these lanes to be striped because even tonight, with the spray paint on the ground, drivers felt no compunction to not drive in them. Perhaps thicker white paint will do the trick. Or those painted bicycle people.

I took New Jersey Avenue again because if something is worth doing once, it's worth doing twice or something like that. Today was less crowded than yesterday and I didn't mind it nearly as much. R Street was also less crowded and at the time I think I recall seeing some stuff that might have been worth blogging about, but apparently not. I guess I could make something up. Um, I remember feeling like I was riding pretty quickly, so that definitely seems like a kind of fabrication. Most of my ride, I was consumed by the clickety click clicking on what turned out to be Kirby's right pedal. Clicking is one of the more annoying sounds one's bike can make, along with squeaking, squealing, gnashing, thudding scraping, scratching, noshing and grinding. There's not a lot you can do when your bike makes weird noises. Maybe you can ignore it, but maybe I can't. I tried to discern what it was. The clicking seemed to stop when I wasn't pedaling, so I donned my deerstalker, and decided it had something to do with the pedal. It turned out it did have to do with the pedal (see opening paragraph, those of you who read this from bottom to top. Also, why do you do this?).

How did the people at 10th and R NW get that stop light put in? It's a T-intersection and I have no idea why there's a stop light at all. They must have some serious political pull. Overall, I think there are two many stop lights in general and there's not nearly enough creativity when it comes out our traffic control solutions. There should just be a stop sign on 10th and no light on R. Otherwise, it's just a waste. I demand a redress of these grievances!

It's been interesting trying to learn how to ride the Brompton, with its two gears and tiny wheels. I've been "spinning" a lower gear, turning the pedals over at a much higher rate. I think I pedal about three times as much as I normally would on the other bike. It's just different and it'll take some getting used to and I don't necessarily mind it, but it's probably the most marked difference between riding the two different bikes.

And now, on to the ride home. I left work late (oh yeah, sorry about not writing up these posts at lunch. It's still add/drop and I'm unpleasantly busy for too much of the day. Please address you angry letters to the university president. Or maybe, don't write those letters because, you know, remaining employed and such), taking the usual route down Massachusetts. A rode next to an out-of-service bus. Why is any bus out-of-service during evening rush hour? I don't understand. I turned left at Garfield, detouring through [neighborhood between Wisconsin Avenue and Connecticut Avenue] and then through Adams Morgan, across Euclid Street to 7th, the part of 7th called Georgia Avenue, parallel to Howard University. There's no bike lane on Georgia Avenue, at least until south of Florida Ave. I don't especially like that. South of Florida, it's pretty breezy and I didn't mind the breeze-itude, which is not a real thing. I am, however, beginning to get mildly upset about the idea of wind once again hampering my commute. It's gusted a few times in the past couple of days and I simply don't care for it. I rode to Bicycle Space where they, after some time, replaced my busted right pedal (For those of you reading from the bottom, please see the middle paragraph and then the first paragraph. Also, please prepare for a question).

After the bike was fixed, I rode down 7th to Mass, Mass to 6th, and 6th to E, which I took back over to and around Columbus Circle, down Massachusetts and basically to home, after stopping briefly as a market by Lincoln Park, which stocks, amongst other things, fancy cheeses. I've long been seeking a local corner store replete with fancy cheeses and I'm grateful I've finally found one. There's no point in living not near a place that sells fancy cheeses.

I shall leave you now. Thanks for reading.