Ride In 9/7: Forever in Bleu Cheese

A love late summer morning bicycle commute. Was it hot? A little. Was it muggy? Mostly. Did I care? Sort of. Did I see other bike commuters? Uh huh. Have I run out of rhetorical questions? What do you think? (see what I did there?) (and there?)

And that's pretty much all I've got. See you on Monday folks!


Ok, I'll try a little more. I rode around the park and there were many more CaBis left than usual. This happens frequently on Fridays, probably based on alternative work schedules. Though I think that if I had an alternative work schedule I'd be more likely to be biking on a Friday than not. I would also buy a big aquarium and keep colorful fish for pets. I suppose I technically don't need to be off every other Friday to do that, but I'd feel bad for the fish not getting to spend quality with me.

The Brompton isn't making noises any more, so I'm relatively pleased with that. I'm trying to decide how important/necessary/useful a front bag would be for the bike. In practice, I very much enjoy the idea of the utility of not having to wear a bag on my back, but I've priced some of these bags and they are rather expensive. For the same amount of money I could buy so many waffles and then eat those waffles, or at least some of them, and then not feel too great because I ate too many waffles. That's how many waffles I could buy: enough to eat too many of them but still have a lot of waffles left over and that's how expensive the bags seem (I say seem because it's not like they cost like a billion dollars, but they cost a lot for a bag). I might just invest in a good/better messenger bag/backpack, so recommend away. My current bag is made of canvas, which isn't waterproof in any real way. It also gets gross from sweat and stuff.

I rode behind a few people on East Capitol and then bike traffic was fairly light on Pennsylvania Avenue, not that heavy bike traffic would really have any appreciable difference on my commute. Or at least not until it's really, really heavy. But even with little bike traffic, there are some places along the route that could really benefit from some regulation of traffic flow. For example, the entrance to the White House plaza has maybe 15 or 20 metal posts in front of it, denying access to cars, but allowing for pedestrians and cyclists to pass through. But with all those choices, I've seen bicyclists nearly collide into one another because the riders coming up 15th street and the riders heading towards 15th street each want to ride through the same gap, the one closest to 15th street on the other side of the guard house. See below: 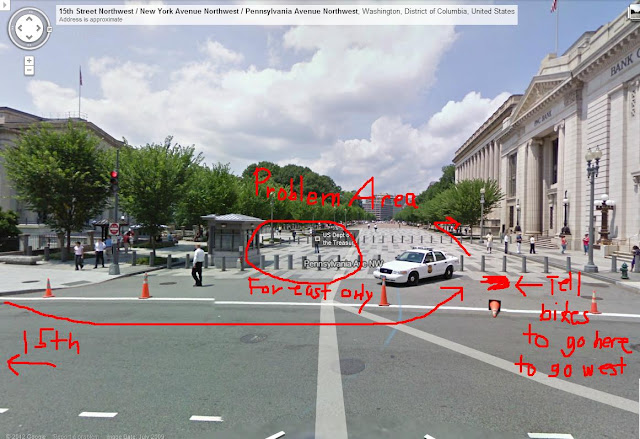 Essentially, I think that they should just add some markings (ideally, green paint) that extends from the 15th street cycle track to where cyclists should turn to keep on it. That way, you have a clearer pathway that could help avoid some of the potential collisions. It could even just be words painted on the ground, words like "To Continue on Cycle Track, Turn Left Here" but you'd put them where you want people to turn left. I think this kind of clarity could also benefit tourists who are all like "where'd that bike lane go?" Or, if you really want to be classy and/or you hate green paint, you could use darker paving stones to indicate the desired pathway. Anyway, whatever 29 agencies control this space should really drop everything to ensure that this happens as soon as possible.

Another new Bromtpon at Friday Coffee Club. It belongs to Ted and it has Brooks grips and now I want Brooks grips.
It's a beauty.

After coffee, I set out up 17th street, which was vaguely terrible. The only saving grace was the ease with which I could pull up onto the sidewalk when the traffic was too backed up. I think I did this three times at red lights, riding on the sidewalk to the front of the line of stopped cars and then pulling back into the road ahead of them. This might be incredibly bad form on my part, both for the illegal sidewalk riding and the car shoaling. I've given all folding bike riders a bad name for the history of the rest of all time and now they'll have to cancel Christmas or whatever the usual claims are when people write about one person's bad behavior tarnishing the image of the entire group. In case you couldn't tell, I think that's hogwash. But I suppose it's mightily convenient for a scofflaw to exculpate himself, which I believe was something that Michelangelo did also.

Connecticut Avenue to Dupont Circle and through Dupont Circle (not around, but through the park) to Massachusetts where I rode behind a guy wearing funky yellow plaid pants and then I rode up the big hill and then I folded my bike and now it's behind my chair as I type this blog post.