You know how in Gladiator when Maximus is in the afterlife and he's walking across the wheat field and how that's his version of heaven because his wife and kid were there and also there's ample wheat and he gets to touch it and somehow that's a really nice feeling for him? Biking in today's weather is my wheat field. There's something about a crisp early fall day, not still summer and not yet presaging a frosty winter, that's ideal for biking in and biking through and biking during and any other combination of bike and a preposition. You don't get too many "Maximus in a wheat field" days and when I get them, I really try to make it a point to savor them. Just to clarify- I'm not writing this post from some kind of spectral netherworld. There will be no ghost-blogging on TFTS.

What happened this morning? Nothing much. Except for the huge deal which was the free coffee courtesy of The Bike Rack at the intersection of 14th and Q NW. Free coffee for bike commuters! How cool is that? (Coffee was quite warm. I don't want to impugn the shop in mistakenly suggesting the coffee was cold. It was not.) I'm hoping, and quite selfishly, that this gesture leads to an breakfast arms race amongst local bike shops. Maybe next week CityBikes has pastries and the week after The Daily Rider offers breakfast burritos and then Revolution gets a waffle iron in the mix and eventually Bicycle Space brings it with a full omelet bar. As someone who routinely forgets to eat breakfast, I'd really like to outsource this task to local bike shops. Here are some pictures:


Apparently, this is going to happen on the third Wednesday of every month from this month forward, so that's pretty fantastic. So, if the only thing that's been holding you back from bike commuting is the once a month free coffee, I guess you're out of excuses. Jon, of #fridaycoffeeclub and button selling website fame, was there when I was there, he having ridden a good mile downhill from his house on the way to work. It was good talking to him, though he, like me, regretted that the shop didn't have bike stuff for sale. Prime me with free coffe and I'd probably spend money on bike stuff. Just saying.

Before I got to coffee, I took a stupidly roundabout route, riding up Penn and then 15th and then turning left onto P Street. And then I ended up at 16th Street, which was approximately two blocks in the wrong direction from where I wanted to be. I guess I didn't have enough coffee this morning before riding to coffee this morning. I turned around and then rode back to 14th street (instead of riding up 15th for another block) and then slowly rode my way up the sidewalk for a block until I got to coffee.

How do touristical types know that the 15th Street Cycle Track continues on Vermont Avenue from Lafayette Park? I don't think there are any signs. There should be signs. Even if maybe touristical types wouldn't actually take the cycle track because it's not exactly like there's a ton of touristy stuff on 15th.

After coffee, it was down R, through the valley of the shadow of shoalers (though I ride through the valley of the shadow of shoalers, I will not be afraid, for thou art with me and together we'll muster the slightly more energy needed to pass people who ride so freaking slowly that I cannot understand why they rode in front of me in the first place. I really have to summon all of my patience sometimes to not go "WHY? WHYYYYYYYYYYY?" as I pass them 30 feet after the light turns green. And really, I'm not fast or even trying to go that fast) and then behind my second Xtra-cyclist of the day. I've seen a lot more Xtracycles lately and I think that maybe people with children (parents I think they're called) are getting hip to the idea of having bikes on which it's easier to ferry children. Has anyone else noticed this? I think that maybe the beginning of the school year hastened this.

The bike is still doing some weird chain skipping. I'm home now, so I guess I'm not going to let this bother me.

My trip home was pretty fantastic, except for the somewhat ludicrous car traffic that backed up most of the way on Massachusetts. I rode on the sidewalk to avoid it. I'm not going to be a martyr to car traffic. If I wanted to sit in traffic, I'd drive. Instead, I rode on the sidewalk, diligently, but it was still faster and safer than riding in the road. In this part of DC, it's completely legal and I have absolutely no qualms about doing it, even though I'd prefer not to. The thing is that I'm interested in getting home and I'm going to do the things, within the bounds of the law and good judgment, that get me home as quickly and safely as possible. And I encourage you to do the same (especially if you're on a bike. Not so much if you're in a car. Please don't drive on the sidewalk). There's nothing wrong with riding in your own self-interest. That's how every other road user gets around and because you're on a bike doesn't mean you need to take some ultimately ineffectual moral high ground. Be courteous, but don't feel the need to be self-defeating. Just get home.

I rode through Dupont Circle, down Mass and made a right turn onto 15th, which I followed to its  end at Pennsylvania. The ride down Penn was fine, except for some weirdness at 7th. Two bicyclists just rode right through the red light and directly in front of the cars in the middle of the intersection. They didn't ignore it and they weren't oblivious to it. They just saw it, decided it didn't apply to them, and then kept going. It was odd. I believe I called them "fucking morons" which seemed apt and that's a fucking moronic thing to do.

One of the things I like to do when I see a driver signaling to make an illegal turn at one of the intersections at Penn is to look over my shoulder, back at the sign that shows "not left turns," maybe hoping that they'll see me looking at the sign and maybe see the sign themselves. I'm only doing it because I don't want them to get a ticket. My passive-aggressive glances are all about helping.

Up the House side of the Capitol and past the parking lot that is the Capitol plaza. Congress is in session and two thoughts about that. The first is that Congress, or the people who work in/at Congress are basically all old white men. Many of them are pudgy. This isn't exactly hyperbole. The second thing is that the end of the day at the Capitol is very much reminiscent of the end of the day at an elementary school. It's fucking parent pick-up, with a line of SUVs driven as close as they can be to the building so the little precious flowers don't have to walk very far and then it's zoom zoom back home. On Independence, I'm pretty sure I briefly rode next to Tom Coburn, driving to wherever he lives, doubtless under a few miles away. Sorry ladies, for not throwing an egg or something.

I rode down Pennsylvania to 11th, stopped at Fragers and noticed an unlocked CaBi at the bicycle rack. People- don't do this! 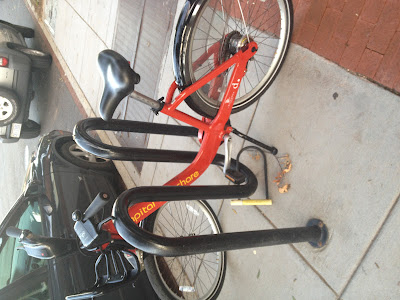 Up 11th SE, right at the park and then home. A great ride. And a little noteworthy because I've been riding this route and blogging about it for almost exactly a year. Here's the first post. Thank you all for bearing with me. I'll be back in October. Remember the Alamo. And other stuff, since the Alamo isn't strictly necessary to most of our daily lives.