Hello. I'm back from vacation and back to bike commuting and back to writing about it and if you're reading this, you're back to reading about it and that's good for both of us because I'd hate to find out that you were all ghosts and I was some kind of bike blogging Bruce Willis and Tales From the Sharrows was all just an elaborate story told to Chazz Palminteri based on the pictures of DC I have hanging on the walls of my futuristic prison from which I'll be sent back in time to stop a global pandemic. The Sixth Usual Monkey would be a great movie and I'm surprised that Hollywood has yet to make it, but I'll pitch it as the title when I write the screenplay based on this blog. Much better than its working title, Untitled Boring Bike Commuting Project featuring not Chazz Palminteri.

Not only have I not been bike commuting during my time off, I haven't even been riding a bicycle. I've been doing a lot of driving and walking and even some kayaking (it's ok- I was wearing boat shoes) and while I wasn't exactly thrilled about returning to the office after a wonderfully charming retreat to the bucolic settings of upstate New York, I was looking forward to getting back on the bike, which I did remember how to ride per aphorism. And it felt good and I was happy about it feeling good and I felt spry and the weather was autumnal and my nose was the slightest bit cold and I wore long sleeves but that didn't help my nose any but that's ok because that's not what long sleeves are for. I took the Cross Check and filled the pannier with a few pairs of shoes and some papers that needed shredding and work clothes and no lunch and that's why I'm hungry now because you can only eat so much paper and shoe leather. Please excuse this post if it deviates into a long disquisition on sandwiches, their merits and copious benefits to society, namely as a non-pretzel mustard delivery system. A man cannot live on pretzels alone, which I believe is a direct quote from the Gutenberg Bible. That's funny because Gutenberg was German and German people, according to this scientific research, love pretzels.

East Capitol and then up Pennsylvania Avenue. There was a group of maybe four or five of us together at points and dispersed at others and it was the usual mix of cyclists attired for cycling, some wearing whatever and others wearing other whatever, all across the general spectrum of athletic wear to semi-athletic wear to casual wear to a man dressed in gorilla costume (that one's me!). Freed from the oppressive DC summer heat, I think there's a greater tendency for bike commutes to wear their work clothes during the fall and winter months and I'm glad I have a job as a ape impersonator as I can do the same.

At the intersection of Pennsylvania Avenue and nowhere (it's not a cross street, but the entrance to the parking garage underneath the Reagan Building) there's a stop light and that stop light has a phase in which there's a green left-turn only arrow and a red light and another phase when there's a red left-turn arrow and a green light and bicyclists are supposed to proceed during this latter phase and it's the habit of many bicyclists to proceed during either phase when there's no one who wants to make the left turn or cross the street on foot. Generally, this is a fine thing to do because, really, you're not impacting anyone else. I found myself stopped behind a bicyclist who was waiting at the red light and I stopped too. He might've been waiting because he cares deeply about stopping at red lights or maybe because there was an occupied police cruiser parked to our right. In either case, we waited. But the woman on the Bikeshare bike who rode up behind us didn't wait. She glanced over her shoulder, saw no cars were coming, rolled right past us and through the red  light. And that's when the police officer started her car, turned on her very flashing lights, rolled into the bike lane and asked/told the CaBi-ist to stop. Here's a picture of that from farther down the road:

So, here's the thing. Is it stupid for a police officer to waste time and effort pulling over a cyclist for riding through a red light in a way that was neither unsafe to her nor unsafe to anyone around her? Probably. Could this officer's time to be better spent doing other things that actually address public safety concerns and even those of bicyclists, such as their reckless endangerment by drivers making u-turns across the bike lanes? Sure. Is this in any way just? I don't know. But what I can tell you is that YOU SHOULDN'T RIDE THROUGH A RED LIGHT DIRECTLY IN FRONT OF A POLICE OFFICER. It's a remarkably dumb thing to do. You shouldn't drive through a red light in front of a police officer either. You might be able to jaywalk, but I wouldn't necessarily advise it. Yes, the vehicles of the state security apparatus in DC in so plentiful that they're like shrubbery and just blend into the background, but it's still worth paying at least a little attention on the off-chance that something like this *might* happen to you. Custom is custom and habit and habit and safe is safe and dumb is dumb, but the law is still the law and, unfortunately for this woman, it seems she ended up on the wrong end of it and that really sucks. This is also an especially good reminder about shoaling and passing bicyclists who are stopped in front of you. I think that part of the reason why the officer elected to do something is because the two of us were stopped at the light already, making her decision to roll through it seem even more blatant.

I counted 15 cyclists waiting for the light at 15th and Massachusetts. That's fantastic. Bike commuters of all stripes too, and even some polka dots. Polka dots are so in this year.

Helmets? Sometimes I wear one, sometimes I don't. Helmanns? I almost never apply mayonnaise before a long ride, but I do use it when making chicken salad.

They painted some green stripes as an extension of the bike lane across the intersection of R Street and Connecticut Avenue. The green stripes symbolize safety or something. I quite like them, though polka dots would've been much more fashion forward, but perhaps harder for drivers to interpret.

There was a car crash at the intersection of Massachusetts and Garfield Street and this incident between two drivers caused hundreds of other people in cars (and on buses) to be delayed. This is a pretty ridiculous state of affairs. The minute a crash between two bicyclists causes this kind of back up, I'm switching to pogo.

Found this in the locker room this morning. 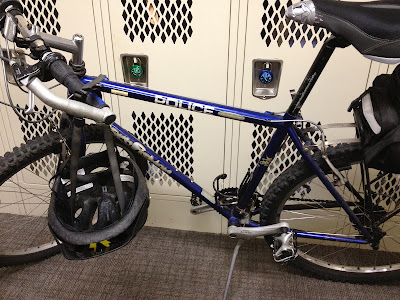 It's a police bike, left there by one of the bike officers of the campus police. He apologized when he came to pick it up about 10 minutes after I got there. It was hardly a bother. A little strange, but not a huge deal. Way better than a police horse.

Thanks for coming back. I've missed this.