Was it humid this morning? I couldn't notice with all of the water in the air.

I decided to ride down Massachusetts Avenue and around Stanton Park towards the new bike lane near Union Station. I have a lot of problems with this bike lane, especially when riding west. My biggest problem is that it doesn't start until after the intersection of Massachusetts Avenue and Union Station Drive and this intersection is super perilous and would really benefit from the presence of a bike lane! This section also hasn't been paved, so maybe the bike lane situation will be addressed later. But as of now, it doesn't really pass the "kid" test that I apply to all bike infrastructure, which is the test that asks the question "would you ride this section is you were accompanied by a baby goat? Or even a human kid?" I can't say that I would.

Part of the Union Station/Columbus Circle renovations is the extension of the on-street section of the Metropolitan Branch Trail. Here's a section that was recently built.


I get what they're trying to do here, namely prevent drivers from driving on the trail. But I wouldn't exactly style this very friendly to pedestrians or bicyclists. I love barrel racing as much as the next guy but this is ridiculous.

Is First Street NE one-way or two-way? I think it used to be one-way, but now it's two-way. Though I'm pretty sure I saw southbound drivers on both sides of the yellow line. If it's two-way now, that's a massive improvement for cyclists since we'll no longer have to ride on the sidewalk for half a block. 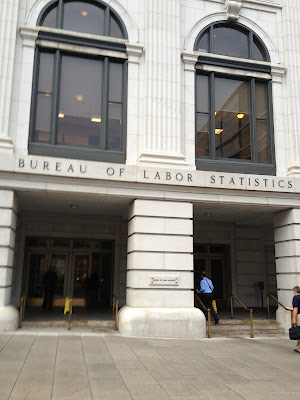 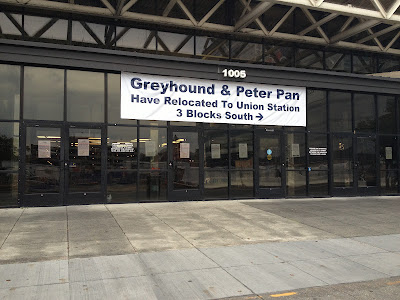 I have a bit of a history with the Greyhound bus station (I used to busk there when I still played the banjo) and I'll miss it a little. The Official Wife and I used to take the bus to visit each other when we were in college. I have somewhat fond memories of taking the overnight bus from DC to New York and arriving at the Port Authority bus terminal at 4:30 in the morning and walking down 42nd Street to take the train up to Connecticut. It was cheap and we were young and in love. Thanks, bus station, for playing a small role in the budding relationship that became that budded relationship that is now my marriage. 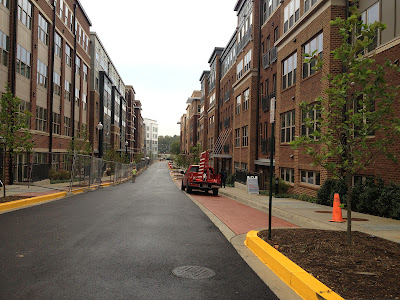 I followed R Street across Florida Avenue (again- its a diagonal street) and continued along the way and for a bunch of blocks I rode behind a guy and his kid. The kid, who was a little kid, wore a backpack and on the backpack was written the name THEO ROY, words from the Greek and French respectively meaning God and King. Now, I've never been granted the naming rights to a child but I'd like to think I'd do a better job managing expectations. Best of luck, God King.

I ride up a big hill on my way to work and down a big hill on my way from it. In spite of the relative wheeeee-ness of my downhill afternoon ride, I just wasn't feeling it today. You know how some days you see those bike commuters who just look surly and pissed off, like they might as well just be miserable and driving a car? That was me today. I'm really not normally like that, but for whatever reason (read: very specific reasons that I won't detail), I just wasn't feeling it today. I even wanted to kick some cars, as their drivers passed me too closely. I mean, if you're close enough to kick, you're probably too close, right?

Down 19th and down Pennsylvania and down 15th and down Pennsylvania again. A very mixed bag when it came to pedestrians blocking the bike lanes today. Some seemed rather apolegetic and got out of the way when they realized that they shouldn't have been there and others seemed extra-oblivious and wholly dedicated to completely ignore all of my huffy sighs and passive-aggressive glances as the walk signs that very much did not read WALK.

I rode up the House side of the Capitol. There were approximately one million tourists. One million.

I continued down Pennsylvania Avenue (seriously, DC has like three streets and two of them are Pennsylvania Avenue), passed an armor car, dodged an SUV, stopped short when a guy drove his red sedan towards a parking spot that he wasn't going to fit in and made it seven blocks before stopping near the sidewalk where I intended to cross the street to get to the Post Office. As I stopped, a guy on a moped rolled up behind me and then cut me off to pull up onto the sidewalk. When can we start the War on Mopeds?

The Post Office gave me a certified letter that told me I owed DC a fine for $75 for excessive growth of shrubbery.

I rode up 7th Street to North Carolina, rolled a few stop signs, passed the park and turned down A Street to get home. I walked through the door and was greeted by a hyperactive poodle. EtP might need Ritalin.