boo hoo. what a rough life. I have to ride my bike from Embassy Row to Capitol Hill and sometimes I complain about stuff. I should never complain. Quibble, sure, but complain not at all. It was just a great night for bicycle riding and one of those times where you feel connected to the place the you live in a deep and meaningful way.

I took the L Street Cycle Track and it was a brilliant night. No one was parked in it and there was very little CONFUSION in which drivers did things they oughtn't. Back to the theme of not complaining, I think it's a sign of how good things are (or are becoming) for bicyclists in DC that I'm mad that there isn't 100% enforcement in the protected cycle track that was built in one full travel lane that until a few weeks ago was 150 parking spots. There are flaws, but the flaws can be fixed and the problems can be addressed and with time and a commitment to improve it (which I definitely believe DDOT has), it will only get better. So go out and use it. It really is like 90% great, even when this happens:

11th to Penn. Penn! PENN! I hadn't been riding it this week because I thought that the repaving was considerably more advanced and the that the cycle track had been disappeared, like a Soviet dissident, but it was still there and I rode happily along from 11th to 4th and then cut across the Mall. 4th Street is a fine street, but it's very wide and some people really rush to try to catch the light at Independence.

Near SW (a neighborhood appellation I'm not sure is real) is an area that I'm not sure anyone is going to miss. It's sort of terrible. And charmless. And 4th Street itself is a bumpy, ruddy mess, at least until the other side of the tracks. The at least there's a bike lane. And a well-used one at that.

I stopped at the Safeway at 4th and M. First time in that store. Ample bike parking. As I passed the self-checkout, a young woman in line touched me on the shoulder and asked "How you doing?" I think I said "I'm good thanks how are you?" and awkwardly and quickly shuffled away. Another peril of bike commuting: you become irresistible to strangers.

Tip for grocery shopping by bike: use your bike bag as your grocery shopping cart. This will help you avoid over-buying and not having a good way to get your stuff home. This seems like an obvious thing, but I've screwed this up a few times and it sucks to try to balance unwieldy and cumbersome bags of on sale stuff you didn't actually need on your handlebars.

I rode M to Canal Park, which had just opened earlier in that day. I'm not a park connoisseur, but this one is pretty fantastic. There's ice skating. It's really worth a visit. 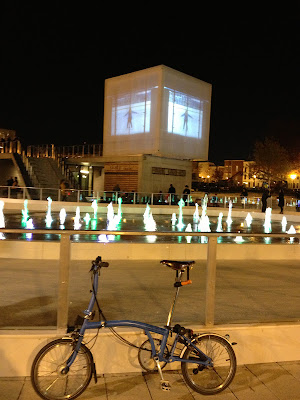 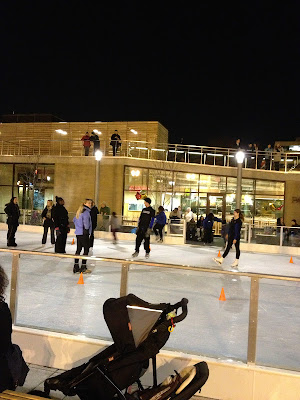 Let's say you live in/on Capitol Hill, but you're not a fan of riding your bike up hill. L Street SE is your back way on to hill, with minimal uphill struggle. It might be out of your way a little, but such is the cost of not wanting to ride up a hill. If you live under Capitol Hill, then you're probably some kind of Hobbit congressional staffer.