I crashed my bike. I'm ok. Here's what happened. But first, on crashing:

The connotations and after effects of falling off your bike are quite negative, but the sensation itself is really quite pleasant. There's an element of surprise and then you're floating, floating through the air, and you're weightless and it'd be rather quite fun, did it not end so quickly and end so...gravitationally.

I was riding down Massachusetts, having left work maybe two minutes earlier. I was in the right lane and I was following another cyclist. He was riding slowly, with parked cars to his right and moving cars to his left. He was in the door zone and he was riding quite slowly. "What I jackass," I thought. "Riding so slowly down this wonderful hill- such a waste." And then, I hit this:

It's maybe 3 inches by 4 inches and an inch thick. My Brompton didn't even stand a chance. I went down, right thigh first, following by right hand, then bum and that was pretty much all of my that felt the need to fall down. One of the advantages of a folding bicycle is that it's pretty close to the ground, so there's less far to fall. I've taken a spill off the Brompton before, but this was the first time I ended up on the road. To the best of my knowledge, I remained fully within the right lane. I got up, raised my left arm in salute and I "I'm okay-ed" myself to the driver of the gold Prius who had stopped behind me after I had fallen. Nothing wrong with my bike, except for this chain issue: 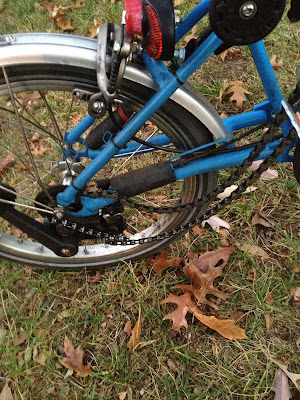 I wasn't totally sure how the rear derailleur of the Bromtpon worked, but I figured it out and I was soon enough on my way.

In short, this situation was something of a perfect storm for a bike crash. I was hemmed in between parked cars and moving cars. There was a cyclist in front of me, so I didn't have a clear view of the road ahead. It was dusk, the duskiest time of day, when visibility tends to be the worst. And I hit the concrete and I went down, but then I got back up and everything is fine. These things happen, I guess, and I'm glad this didn't happen when I was riding much faster as the consequences would have been far worse. I sort of ripped the palms of my gloves and I might have a tiny scuff on a pair of khakis. My coat needs dusting, but I'll leave that to one of my footmen. But overall, I'm no worse for wear and this isn't going to be a seminal moment in my biking life THAT CHANGES EVERYTHING. Except maybe I'll get a tattoo on my back of the image of the concrete slab surrounded by Gothic script letters spelling CLOD LIFE.

Eleventh Street looks way classier than 11th Street, but since both streets are the same street, they look exactly the same and tonight, the sameness include a pickup truck that cut me off and buses belching fumes and one BMW SUV with an Obama 2012 sticker driven by a woman who saw no need to not drive on the wrong side of the street to get to the left turn only lane at E. I rode E and I saw Chewy abike (like afoot?), wished him well, and then at the next block, I encountered Dave and Kid O, heroes of the #stoputurnsonpenn movement and I stopped and talked and relived my silly bike crash and I cursed in front of a kid and oh well. And I showed the folding and unfolding mechanism of the Brompton and I wished them well and then rode down E and at one point four cyclists congregated at a light and two shoaled and then I chased the two shoalers down and then one of them turned off and soon the other one was on the sidewalk, but then he was behind me, wheelsucking, in Columbus Circle and I decided to see what would happen if I tried to go fast and I tried and then he wasn't there but that was probably because he went a different way because I'm pretty sure I saw him again as he rode in front of me where Maryland Avenue meets C Street NE and then I was riding behind a totally different guy and I followed that guy down Massachusetts and around Lincoln Park and then at the intersection of East Capitol and Massachusetts, where there's a sign that tells drivers to yield to bicyclists, there was no yield undertaken by the driver of a rather too large black Land Rover and if this is what it means to be land roving, I shall have none of it, though, technically, he didn't need to yield to me since we were both veering right, but were I not veering, then I would have been in a heap of trouble, or maybe just in a heap. but all's well that ends well.