I'm knackered. Just worn out. Maybe it's from the falling down. I was tired this morning and I'm tired now. Too tired, just like my bike. Before I left work tonight, a fellow bike commuter suggested that it was almost time to don the "face masks" on account of the cold and presumably some harmful, 12 Monkeys-like viral outbreak. I suggested that perhaps this wouldn't be necessary until December, which is next week. Also, since I normally ride wearing a Jason-style hockey goalie face mask (drivers don't mess with me), my face tends to stay warm no matter the weather.

This morning, I took East Capitol with the intention of riding Pennsylvania Avenue with the intention of seeing whether the cycle track had been repainted. At 6th, I ran into Dave and Kid O, who have become regulars on this blog and also regulars on the commute. We rode together, the three of us, down through the Capitol grounds and out to Pennsylvania through the not-quite-painted Pennsylvania Avenue and we chitted and we chatted and I interrupted yet again some precious moments of father-daughter bike commute bonding. They left me around 7th and I kept going and soon enough I find myself not only where the bike lanes used to be but were no longer, but instead where the bike lanes used to be and now are again.

First, they were just a unofficially there.


Then, they were officially there: 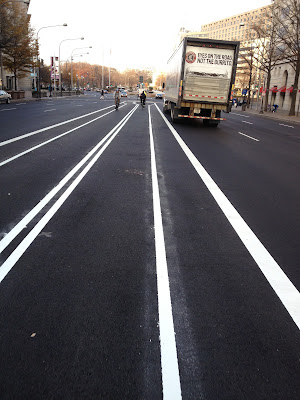 Good to see you again, white lines in the middle of the road.

They didn't pave the part of Penn on the west side of 14th. Accordingly, not only is the old bike lane there, but so are the bollards.


There are plenty of bollards left on 15th. There are also plenty of surly Secret Service types, one of whom told me to get on the sidewalk when I tried to ride down Madison Place. I'm glad that in obliging him I played a small part in keeping our President and country safe. WHERE'S MY PARADE?

It's been a while since I've taken 15th north. It still goes north. South, too. It's like a bike lane swing state.

R to Massachusetts and I spent some time whistling, but I know not what I whistled. I mostly remember just feeling tired and thinking how I want a closer commute and an opafiets and to never ride up a hill ever again, even though on most days, I savor my commute.

I did savor my evening commute and I didn't even fall down, not even a little. At Idaho, some jerk lady nearly ran me off the road, totally unaware that she was doing it and I think that says a lot about some of the problems associated with driving. There was lots of car traffic on Massachusetts and then again on 23rd and even a little on L, but the problems of cars aren't necessarily my problems and I wended as I wanted and picked my way through the morass, surely and safely. And slowly, as I was knackered.

I biked a perfect on L Street. "Biking a perfect" is the hot new phrase that all the hip bike commuter bloggers are using to describe when you get through a stretch of road where you might could expect problems, but then don't experience any because everyone is very well-behaved and follows the rules and doesn't sklomp everything up. (Sklomp might not be a real word, but the Official Wife and I use it and you can probably figure out what it means from context). Anyway, I encourage you to celebrate when you bike a perfect, because it's a real accomplishment. It's like winning a game of backgammon. I've written this before, but it's worth repeating (mostly because you can't stop me. It's my blog and I'm repeat what I want, darn it! You may skip ahead): backgammon is an excellent metaphor for bike commuting because you're not just competing against someone else, like in chess and checkers, but because you're also competing, so to speak, against chance. You get the dice rolls you get and you have to do the best you can with you got. Bike commuting might also be like these other board games: Trouble, Sorry, Hungry Hungry Hippos (if you bike home without eating lunch) and, uh, Battleship, assuming you bike down by the Navy Yard, I guess.

11th to Pennsylvania. Almost all the bike lanes are painted, except for maybe one or two blocks. Maybe they'll be in tomorrow.

There was a very earnest CaBi-ist in front of me for a while and he was earnest and he wore khakis and dress shoes and was probably in his 20s but looked 17.

I forgot to mention that I saw on the street, but didn't pick up, a New Orleans Saints beer coozy. Street loot is the best.

My legs felt great about six blocks from home. It was groovy. I stopped at The Cupboard (15th and East Capitol, and the official convenience store of #TFTS) for milk and beer. The milk was whole and the beer was bottled. I barely had room in my bag, but I made it work, and I made it from work to home in two blocks and two minutes later.