Ride Home 12/4: I didn't ride in today, but I did go to the ribboncutting. But I took Bikeshare home.

Happy Birthday, MOM! You continue to be one of my favorite readers of the nine people who read this blog. Definitely in top 6.

The L Street Cycle Track officially opened today. Here are sundry pictures and then some snippets from an email I wrote about it, in which I gathered most of my thoughts in a somewhat coherent way for the first time.


I'll say this about Mayor Vincent Gray. I've seen him speak on a number of occasions and I've never really been impressed. Speeches, they just aren't really his thing. But, this was my first time shaking his hand and standing next to him. The man has a real aura and charisma about him, something I'd say is like that of a star high school quarterback, a kind of physicality that commands a certain kind of respect and he projects a kind of sturdiness and authority that's hard not to admire. But really, it projected like 18 inches and then it's gone. Very weird. But really interesting.

And now, the email.


1. This is a really important West-East connection in DC's bike network. Currently, there are no bike lanes that run eastbound in DC west of 15th street between the Mall and Q/R Street. That's a huge gap in connectivity and the L Street Cycle Track begins to address this. When the M Street Cycle Track is installed in 2013 (heading in the opposite direction), you could have protected cycle tracks from Georgetown to the Capitol. That's a really big deal.

2. That the bike lane is protected really, really matters. Typical bike lanes are just white paint and they provide as much protection for the average cyclist as you would expect from a stripe of white paint, i.e. not that much. The flex posts separating the bike lane from car traffic provides a barrier that should make this lane much more attractive to cyclists who are reticent riding in other parts of the city. While not every street needs a protected cycle track, having them in a few key corridors will provide immense benefits and should serve to attract a whole lot more people who don't think of themselves as "cyclists" or "bike commuters," but would still like to use the lane to make a quick trip across town.

3. It's not that confusing. I've read a lot of stories about how drivers just can't seem to comprehend what this lane is all about. While the design is new to DC, it's hardly difficult to figure out, especially given that there are signs at each "mixing zone" that tell drivers to cross the bike lane to enter the left-turn only lane. In my weeks of riding the cycle track, I can essentially confirm that more than 95% of drivers fully get this and the transition really hasn't been difficult or stressful at all. While the "mixing zones" are different for DC, I think that in a lot of ways, they work really well. They help to avoid "left hooks," where a turning driver is liable to cut across the path of a turning cyclist. By having drivers move to other side of the bicyclists prior to turning, the risk of these dangerous maneuvers is seriously reduced. Occasionally, you'll see a driver make a turn from the center lane, and that's pretty dangerous, but it's not by any extent a common occurrence.

I think the biggest point I'd like to make about the bike lanes is this: there were already people biking on L Street before the lane went in. Some biked on the left, some biked on the right. The cycle track does two things: it imposes a kind of order on the cyclists, giving them one place and maybe equally importantly, it gives drivers one place to expect cyclists. But it's not just about giving a cyclist a place to be expected; it's about recognizing that people have, are, and will continue to bike for transportation in DC and they deserve a separate and safe place for this. It's not just about adding a cycle track to the street. It's about rethinking what the street could be in order to best accommodate all of its users and to best reflect the reality (not the aspiration, but the actual, present-day reality) that people use bikes to get around.

I've got a lot more to say about L Street and why it really matters, but there's plenty more blog posts in which we can get to that. Anyway, it was a good morning and it was great seeing so many of you there to support the lane. Thank you DDOT and thank you WABA. If you work for another organization that also is a four letter acronym, I thank you too.

On my ride home, I took CaBi. My key was busted (demagnetized AGAIN!) and I had to call customer support. They disabled the key and gave me a "gift certificate" to pay for a one day pass so I could use the bike while I wait for my new key. This is much better than the old way of doing things, where they reimbursed for usage fees. Anyway, I won't be using Bikeshare again this week, so it's not a big deal. JUst a little annoying because the kiosk touchscreen was giving me some problems. Yes, I'm one of those people.

Mass to 23rd to L and a really nice ride in the cycle track. No car problems, plenty of other cyclists around and a nice, warm night for riding. The dock at 12th and L gave me a great place to reset the clock since it's about halfway home. They added a new flex post (I'm trying to adopt the WashCycle convention on bollards and flex posts because he's like 36 spots more local bike bloggerly significant than I am) to prevent drivers from continuing straight from the hotel loading zone and to shortcut the mixing zone. That's what this is:
How far is from downtown to Takoma? About 5 miles. 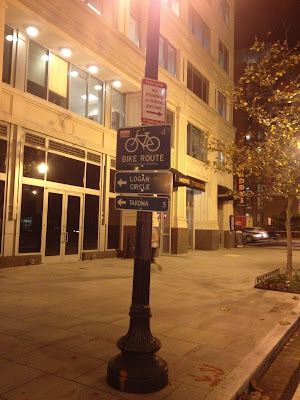 Good luck finding another sign to Takoma between this sign and actually arriving in Takoma. Signs are great, but having lots of them is better than having only one of them.

11th Street to Pennsylvania (a glorious night for it) and then past the Capitol.

On East Capitol I was passed on the right by a guy on a road bike. I totally could have cut him off and ran him into the back of a parked car, but luckily, I'm not just a ball of resentful bike id and have some control of my actions and knew that wasn't a good thing to do. I moved out of the bike lane to allow him to ride in the lane on keep passing me on the right. And then I chased him, moving my Bikeshare bike as fast as it could go. I almost kept up, but I did not keep up. I wanted his comeuppance to be swift, but I was not swift enough to deliver it. Oh well.

I docked at 15th and Independence, responded to an email to the Official Wife about the prospect of Ambassador Anna Wintour, bought some Devils Backbone Vienna Lager at the liquor store with the bullet proof glass and walked three blocks home.