I didn't much care for this ride home. I wasn't in a good mood and I let the bad and disrespectful behavior of some drivers get under my skin and I ended up flipping off a cabbie who made a u-turn across Penn even though this driver was at least almost a full block away from me when he did it and I was in no danger whatsoever. It was a good 10 seconds after he made the illegal turn that we crossed paths. I was also wearing heavy gloves, so I doubt he even knew what I was doing. In short, it was self-indulgent and immature and totally unnecessary. It's better not to let these kinds of these get under your skin, even if you're having a bad ride home and stupid stuff keeps happening. Also, please don't stab anyone. Violence like this is really distressing, no matter the cause.

My route took me down Mass, down 23rd, over L, down 11th,over Pennsylvania and down East Capitol. I don't know what makes some streets "down" streets and other streets "over" streets. Just one of those mysteries of life. It's not an elevation thing and it's not a directional thing, at least not as far as I can tell. Prepositions are just so crazy.

This morning was a fine-ish ride, made complicated by the same scaffolding truck(s) once again parked in the 15th Street Cycle Track. I see. So it's like that then. 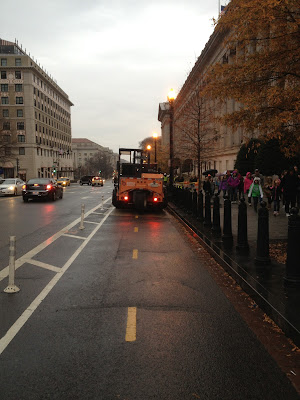 Rather than exasperate you by continuing to ineffectually complain about this to no real end, I'll just link to Kittens Inspired by Kittens. "We are eating pepper and chips" is what I will say to console myself each subsequent time this happens. I see no reason to expect this to not continue to happen. The better part of valor is discretion and you shouldn't let pique cause you to do anything detrimental or harmful, like ride against traffic when traffic is coming. Because that's totally not what I did [whistling and avoiding eye contact]

Coffee was fun. We talked extensively about pantslessness and I was gifted a bottle of coconut rum from Mauritius. Just a usual Friday.

Afterwards, Adam, in town from Norfolk and previous to that some, if not all, of the Seven Seas, rode together to Adams (a different Adam, I think) Morgan. We took the 15th Street Cycle Track from the White House north and was there a crane truck blocking the bikeway so they could hang a big wreath on the outside of the building of the Department of Veterans Affairs? Yes, there was. Why would I ask such a question otherwise? That'd be kind of random, even for this blog.


The 15th Street Cycle Track is definitely my favorite one-way cycle track in all of DC.

On the bright side, the wet leaves did cover up most of the potholes.

We rode up the hill past Meridian Park and that was thoroughly unfun, but we both made it and then to Columbia Road, where we hung a Louie (better than guillotining one), crossed 16th when the light turned green and rode on to WABA HQ, where Adam hoped to meet one of WABA's most not-yet-fired new employees. I continued on Columbia and then Adams (is this the same Adam or yet another Adam?) Mill Road and over the bridge on Calvert Street to a right turn on to Cleveland. The climb up Cleveland wasn't nearly as bad as I expected it to be, in spite of the fact that my wet Chucks kept slipping off my wetter pedals. I was at work not too much later and my bike has been in my office all day and my bike is normally quite versatile, it has not proven itself adept at either filing or taking phone messages.

I'm not going to be riding to work next week, so the next post is going to be the last one for a bit. As always, guest posts in my absence are quite welcome. Email me if you're interested.