Did you know that the NOVA EPIC is not a David Lean movie about the production and release of the Chevy Nova? I certainly didn't. It's not a car thing at all- it's a bike thing! With an epic flyer! 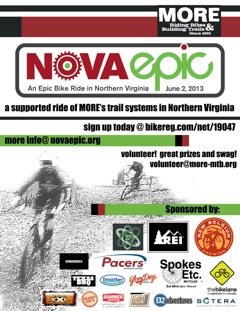 It's on June 2nd, which is the epic anniversary of the day that the Vandals sacked Rome! That's the badass 455 sacking of Rome, not the lameass 410 sacking of Rome by the lameass Visigoths. In any case, if riding epically across the trails and dales of Northern Virginia is your thing (and why shouldn't it be?), you really ought to sign up! It will also support MORE, which I believe is an organization predicated on the moon hitting the sky like a big pizza pie. Or maybe that's something else. In any case, ride your bike in the manner that was Logan and Veronica's story! Summer's almost here. SUNDAY SUNDAY SUNDAE, but only if you stop for ice cream afterwards. You'll earn it.