This morning it was raining. There were few cyclists. It felt like fall. It is fall. There were also fewer runners. There even seemed to be fewer cars on the road. Where was everyone? Where were you? Was everyone on the bus? Was there some kind of bus party and everyone was invited except me? Did the bus party have seven layer dip? Oh man. You all had seven layer dip and I was out riding in the rain. If this bus party had Bugles, I'll never be ok with my having missed it. Never. Catered bus parties are the best, even if they're not a real thing. Yet.
I rode a bike without fenders. I have become the cyclist that I used to chide. Was I wrong then or am I wrong now? Or both? I got wet, but I was going to get wet anyway. Actually, much of the reason I rode the bike without fenders in the rain was to cleaning the accumulated dirt from the previous few days' rides. I'm so clever.
I'm going to miss warm weather, but mostly because I'm going to miss open car windows and the radio sounds eminating through them. The ambience. The atmospherics. Listening first and then looking in to have your suspicions about the occupant confirmed or totally up-ended. I don't think drivers think of themselves as scenery (people, regardless of mode, tend not to), but their car radios provide a sonic backdrop that I have come to miss when it gets colder and the windows are rolled up. Then you just hear the low guttural chug of the engines. And the piercing honks. And there's nothing that distracts or up-ends. And you need to guess if the burly man inside is rocking out to AC/DC or Katy Perry and from which chuckle bunch morning show exactly the guffaws are prompted. The mystery is somehow less satisfying.
I rode home through Glover and Georgetown and across M Street to L Street and then across town thataway. A big truck was parked next to, but not blocking, the cycletrack and that constitutes a victory. It really does. Make of that what you will. Narrower lanes work! (Sort of!) 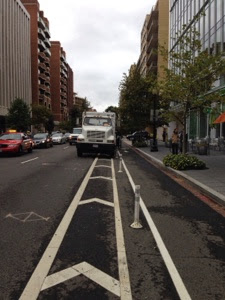