Four rides, one common theme and the common theme was the common weather and the common weather for late October is rain and so it rained, yesterday afternoon and to an even greater extent, this morning, when it rained heavily and unremittingly. But before the rainy commutes, there was one dry one and that was yesterday morning, when a flight of fancy compelled me to ride to work in my work clothes, a rare indulgence of which I hardly ever partake due to obvious reasons, such as wanting to look presentable at work and finding myself less than presentable after my bike ride, even when I ride slowly and with the intention of trying to remain presentable. But, yesterday, given the mild morning temperature and an even more steadfast commitment to trying to remain presentable than usual, I set off in my work clothes to ride to work. Before I left the house, in the pre-commute planning briefing (what? you don't have pre-commute briefings with PowerPoint presentations and whatnot? really?) I had initially laid out my vision to take the folding bike to the Metro, but some late-breaking, albeit highly predictable, information came over the wire (aka twitter) that the Red Line was nearly defunct, so I abandoned that plan, though without abandoning the plan to bike to work in my work clothes and I set off. The ride was fine and I arrived at work as close to presentable as I think I could've been and I would have considered the whole thing a success except for my failure to pay attention to the weather forecast and the rain that it announced and then suddenly my victory of wearing normal people clothes to work turned into the liability of biking home in the rain in my work clothes without a rain jacket or hat and running the risk of dirtying work pants and work shirts which is a thing I don't think to unnecessarily do. Like all professionals, I keep a hooded sweatshirt on the back of my office door and I slung that on and it approximated a jacket and the hood approximated a head covering and I looked approximately like this: 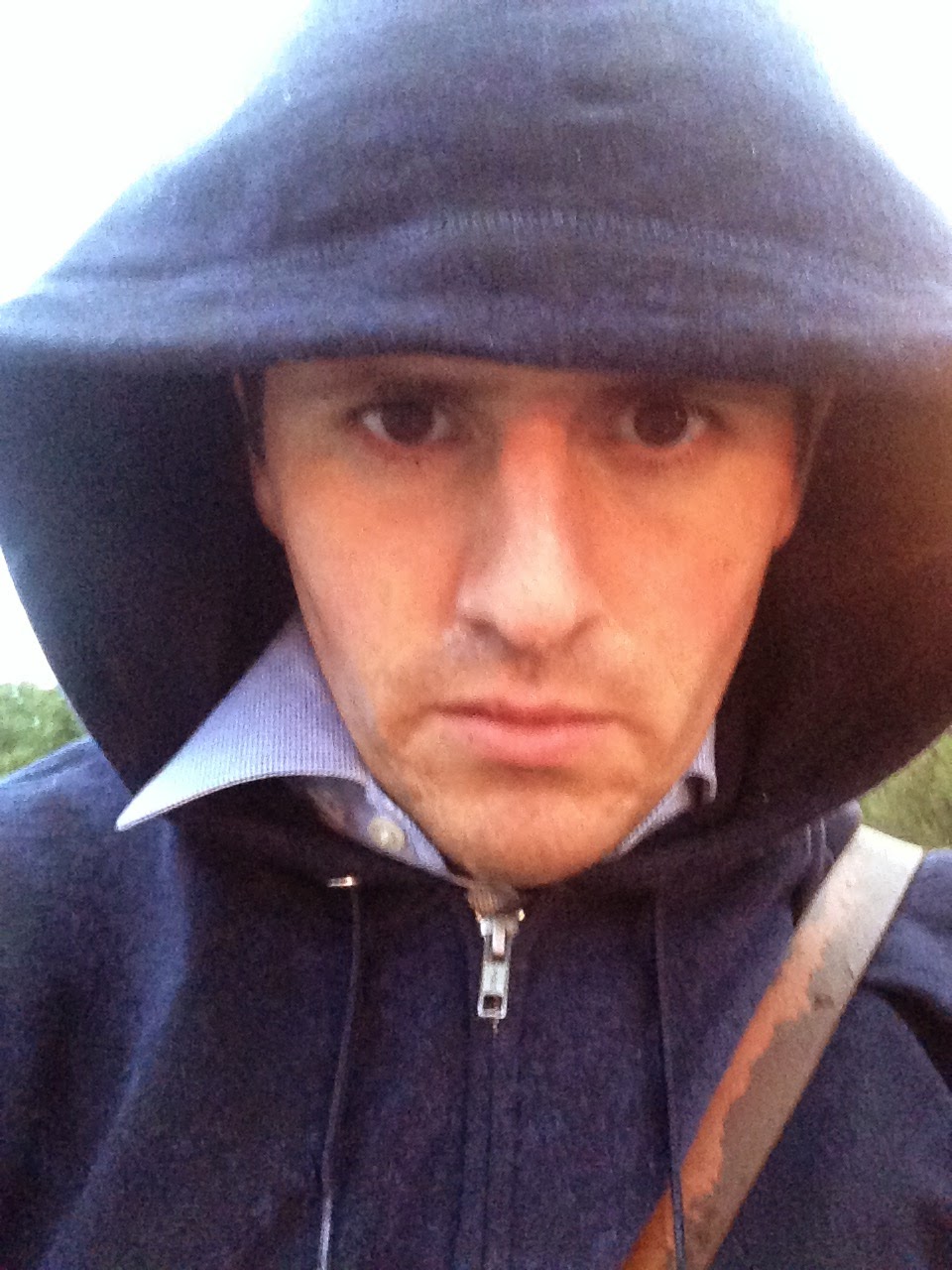 I wasn't altogether unhappy in the rain and the reason for this relates closely to the bicycle I rode and that bicycle is the Ogre, a bicycle I thought was overbuilt and over-the-top for the roads I ride, but it turns out to be exactly the kind of bicycle that is perfect for days that aren't. It hasn't even gotten that bad yet (it will, since it always does) but the Ogre has conquered all that I've thrown it at and with aplomb. The brakes brake brakingly and the wide tires and beefy sturdy frame eat potholes as it potholes were Hostess snack cakes and the bike were someone who really enjoyed and could eat a lot of Hostess snack cakes.* The universe doesn't always give you the bike you want, but it always give you the bike you need and in this case, since I picked out the bike and the universe didn't really have much to do with it, I have both the bike that I want and the bike that I need, though now I also have a hankering for Hostess snack cakes and I don't have any of those at all.

Somewhere along the way, I lost the button from the back of my bag. You find it, it's yours.

This morning, buttonless, I set off to work in the real rain and though I was ready for it, in that I wore a rain jacket, I still got plenty wet because that's what happens when you ride a bicycle to work in the rain. But, as Yogi Berra never said, 99% of bike commuting in the rain is 100% mental and sometimes you have to be 100% mental to ride in the rain, even when you can take the bus or some other covered form of transportation. But still, I didn't need to wear gloves and it's still close enough to shorts weather that I wore shorts, and so, using that as a rubric, it's still not that bad. There are (and will be) worse rains (and sleets and hails and snows) through which I will probably ride to work, but this morning was a nice primer, I could have arrived to worked primmer, but didn't need to because my work clothes were in a waterproof bag and I changed into them when I arrived and packed some extra clothes for the ride home, anticipating, correctly, that the ones I wore in the rain would remain wet even after a workday in which they had time to dry. And then I rode home again tonight and it was, for the most part, totally fine and also dry, for the most part.