oh, hey. it's me. i'm here. using all lowercase letters for some reason. maybe it's to epater les bourgeoisie. maybe it's because my shift key is broken. maybe it's because i just don't feel that capital. maybe it's because i'm feeling dimunutive. or maybe it was a conceit that got my to start typing and now i can't find a way out of it. anyway, i'm back now. I'm back now from being away (I rode on Friday, but I didn't write about it and I have scant memories of it now) and I rode to work today, Thursday, and it was nice to be back on the bicycle. Except for the gentle, but cold, breeze, which nearly felled me. I labored headlong into the wind. I gritted. Winter would be different without the wind. Sometimes I imagine a version of myself that lives in Chicago, but my imagination far outstrips my actual fortitude. I'm not Carl Sanburg. I'm not even Ryne Sandberg. "Here is a tall bold slugger set vivid against the little soft cities;" Bold slugger for a second baseman at least. A second city second baseman. Like a rhino, I lumbered slowly into the gale. Pachyderm. Thick-skinned. You'd have to be if you never win a World Series. Or to ride a bicycle in the winter wind. Or to write a biography of Abraham Lincoln. Stormy, husking, brawling. Anyway.

Pennsylvania, 15th to M. They're not quite done with the interim temporary covered walkway sidewalk on M Street that will maybe keep pedestrians out of the M Street cycletrack while the construction goes on and on and on at the building at the corner on M and 20th. They're painting it white.

When this opens (tomorrow? Monday?), it will be an improvement for cyclists and pedestrians and for hucksters trying to lure easily duped tourists to the famous covered bridge that George Washington himself built with all that extra cherry tree wood lying around. "I cannot tell a lie. I painted it white to hide that it was cherry wood!" might say a historical reenactor in full colonial costume before he demands $10 for a picture with him. "Also, this sidewalk used to be a canal. That's why I built this bridge," he might stammer if anyone started asking too many questions. "No refunds," he would also say, proving himself first in war, first in peace and last to acknowledge that he's ripping you off.

A driver missed me by about 6 inches, cutting across my path in order to turn into a paint store parking lot. It was more dumb luck that any skill on her part. I doubt she (or I) could be that lucky again. Of the many things drivers do that confound, the super-close pass is the one that's just the worst. I have to think it's because they don't know how close they're actually driving. And that they don't know is even more terrifying. I drive sometimes (though almost never to work) and I've driven a lot longer than I've habitually biked and even with all that I wonder sometimes 'how assured can I be that I'm not 6 inches wrong?' 6 inches wrong isn't a lot wrong, until it's too much wrong.

The zebras on Pennsylvania Avenue

will soon be removed and replaced with parking stops, like they have on First Street NE. But until then, the zebras remain. However, parking stops have been added a few blocks to the east and I saw them today. They look like this: 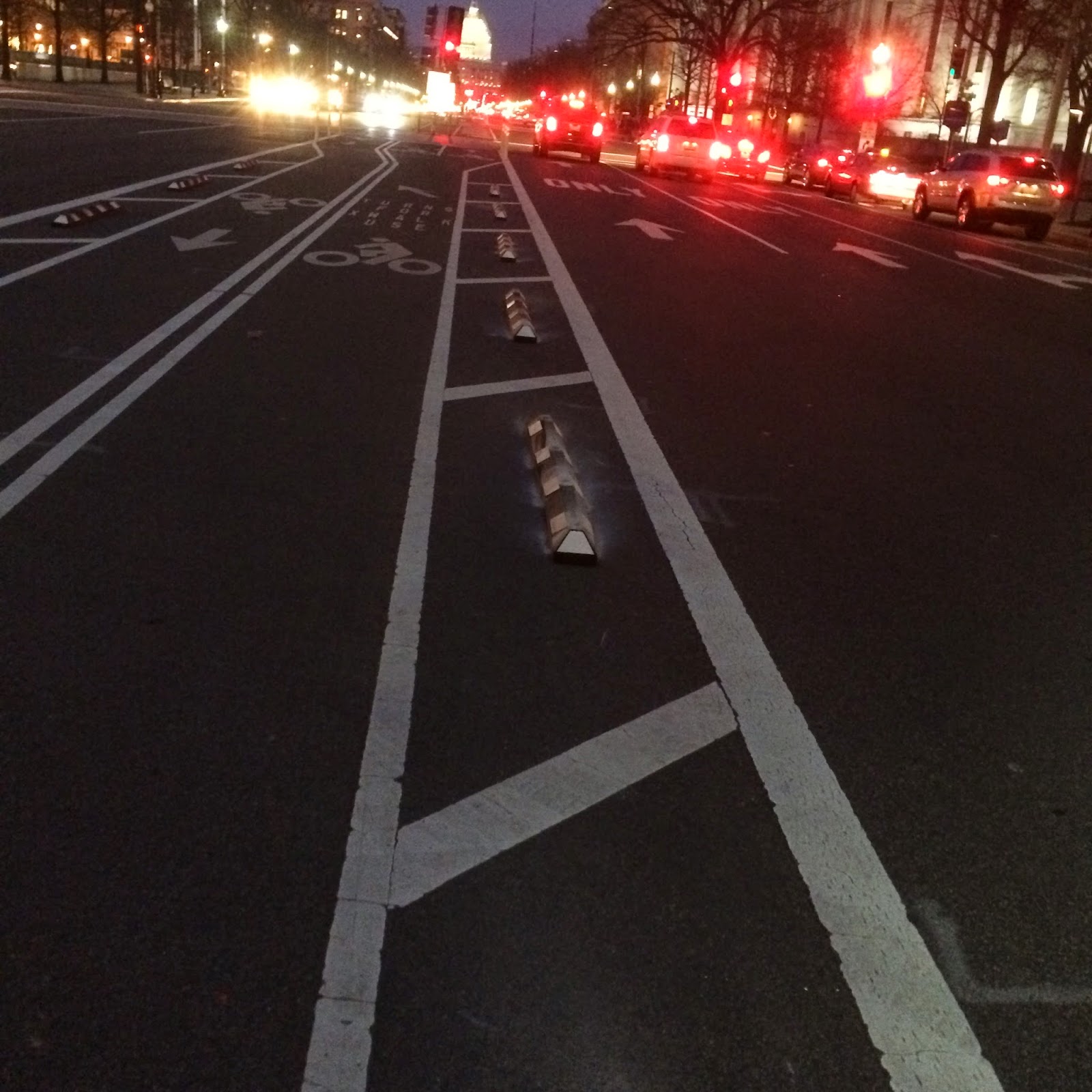 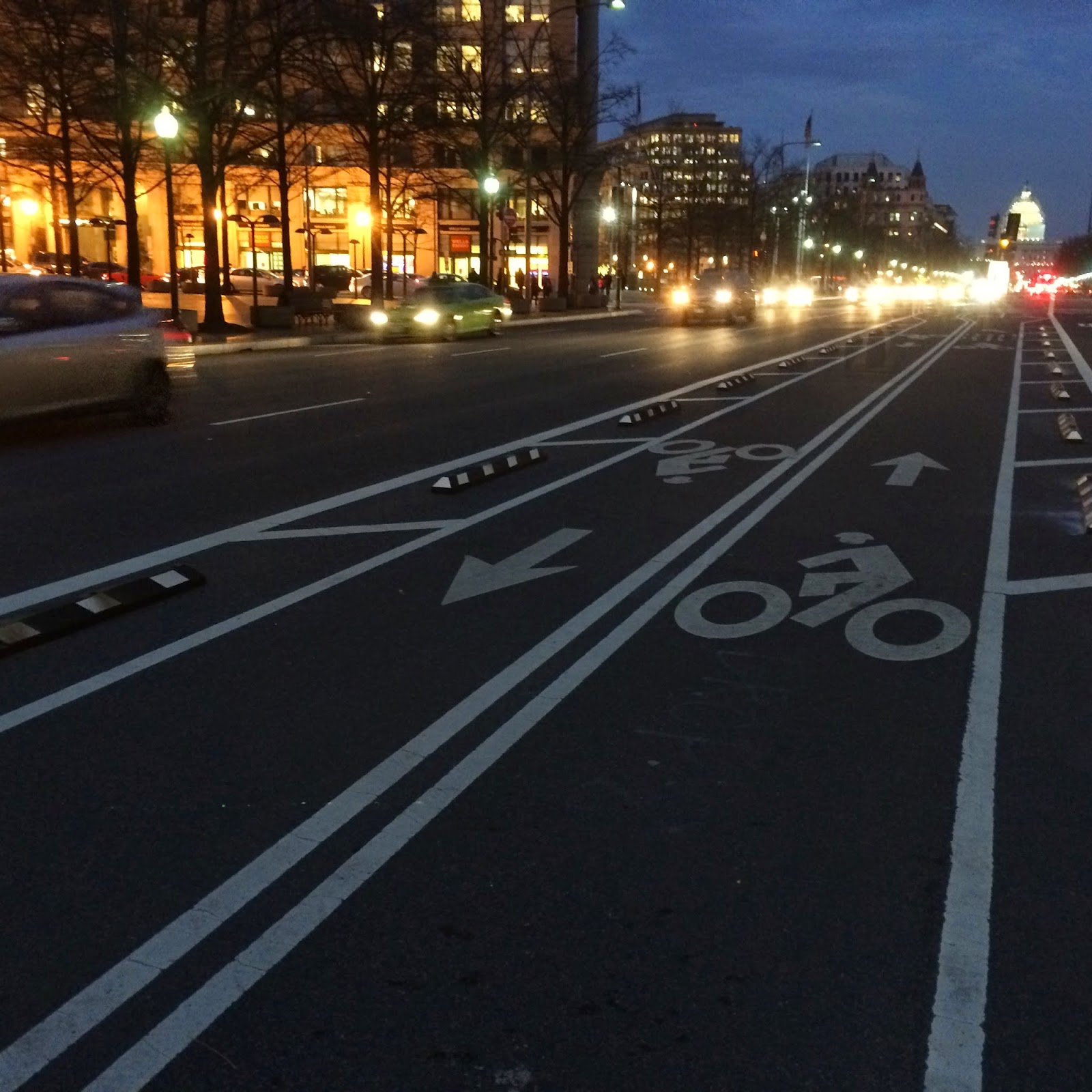 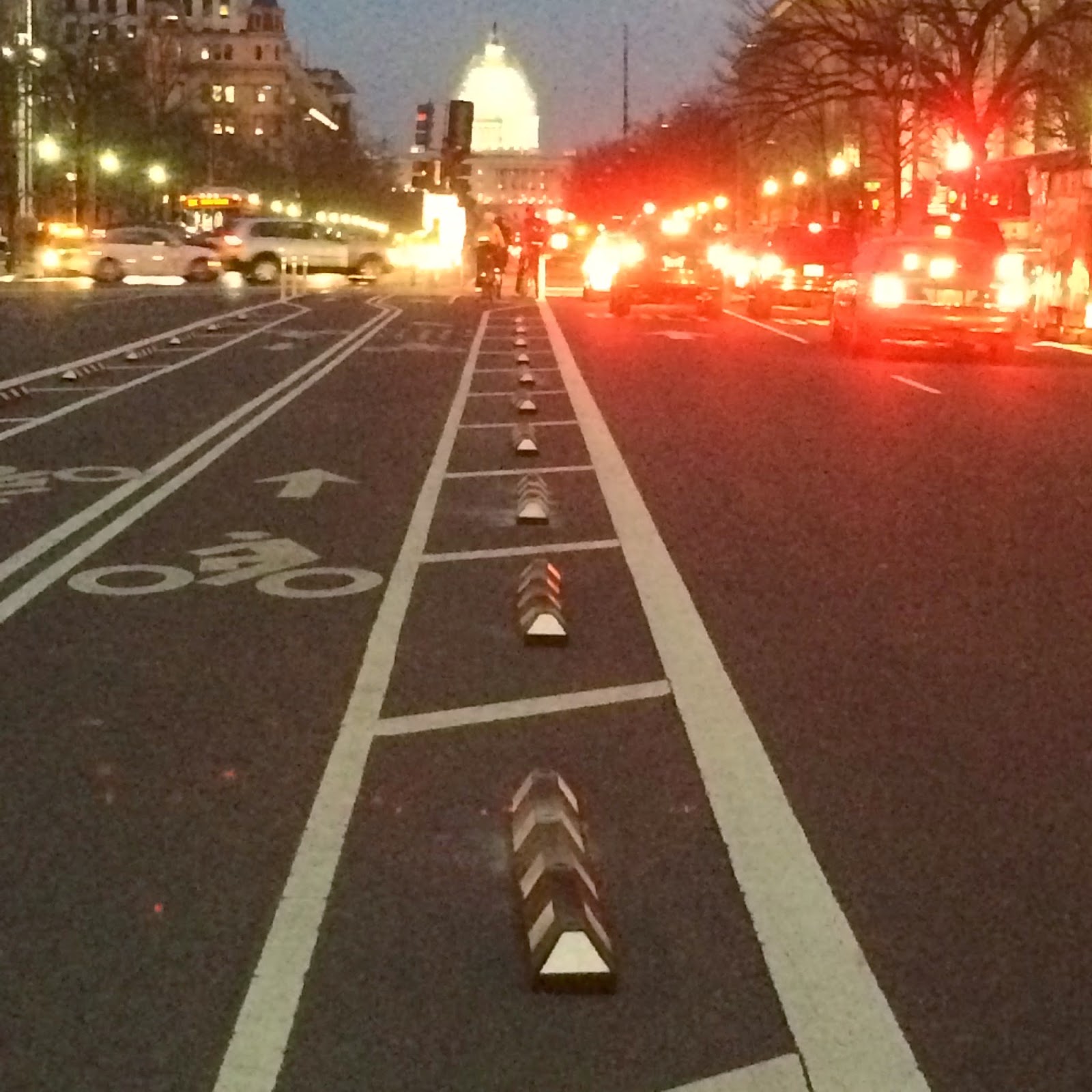 It's still a work in progress (they go for about half a block) and I don't know if there's supposed to be something between each stop, but for now, the gap is pretty big.

With the usual caveats that I am 1) not a bike planner, 2) not a traffic engineer and 3) not as tall as I'd like to be, some thoughts:

1. It's not done yet.
2. I don't get why the gap needs to be so big. But maybe something is going in the gap, because see 1.
3. If the gap is to remain this big, there will be lots of room for drivers (if they are so inclined) to pull u-turns through the parking stops.
4. Even if the gap were smaller, it would be pretty easy for a committed driver to pull over one. Because cars are big. And committed drivers can do pretty much what they want. So, I think, and again, see all caveats and earlier points, the idea is primarily to dissuade drivers from thinking about u-turns and thereby prevent them without actually "stopping them" if that makes any sense. I mean, any extra delineation that further clarifies that the cycletrack is actually a cycletrack is really good, but, if you look past all the caveats and the numbered points to the picture of the zebras, you can pretty much see that this 'if we put some things here, no matter how they're spaced, it'll definitely stop drivers from making u-turns' theory doesn't seem to hold true in all cases. Anyway, I'll keep you posted on how this develops. Because that's my jam.