I really need to write these up before Sunday. A few days elapse and whatever stood out from the commute no longer stands out and then I have to make up a bunch of mundane stuff, maybe even more mundane than than what actually happened, and substitute the false memories for the real ones. I think this might also be the plot of Inception 2: #inceptioneuring. What I can remember of Friday, as I tend to remember better with my taste buds than with my brain buds (note: I never took an anatomy class, am unsure if brain buds are an actual thing), were cupcakes. These cupcakes were brought in celebration of the fact that a bunch of us get together every Friday to drink coffee. Why exactly this needs celebrating, I'm unsure, but far be it from me to complain. In any case, thanks for the cupcake! It was a really great chaser to the donut that I hurriedly wolfed down, so as to free my hands to house a cupcake. Anyway, woo baked goods.

Two things I remember from the ride home and the first of those two things was a nasty pair of gashes in the road from some utility work at 15th and K. They were each maybe an inch and a half deep and at least 6 inches across and I was glad it was light enough still to avoid running into them. I wouldn't be too surprised if they took out a bicyclists or two later in the day, as that's what nasty gashes can do. I was on the Cross Check and not the Ogre, but happenstances like these confirm to me that people who cut holes in the street give very little care about bicyclists who later need to use those streets. SPOILER ALERT: this is pretty obvious. I don't know how utility work is undertaken in more bicyclist-friendly places, but I can only assume it's worth more care than 'eh, what's the worst a two inch cut in the pavement could do?' In this regard, it's a reminder that bicycle-friendliness (whatever that is) is more than paint and plastic sticks, or even concrete curbs and dedicated traffic signals, but a mindset that acknowledges that there are bicyclists, that there are always bicyclists (and they're pretty much everywhere), and that perhaps things should be done in such a way as to not cause them needless harm. You see this lack of mindset with utility cuts and you see it with blocked bike lanes and you see how it applies to pedestrians as well with closed sidewalks and the 'why don't you just wait here for 2 minutes for the light to change, cross the street, walk on the other side of the street for a block, wait another 2 minutes to cross back?' signs that accompany them. When afterthought becomes forethought, then we'll have actually gotten somewhere.

The other of the two things I remember is the addition of more parking stops on the 900 block of Pennsylvania Avenue. As of Friday afternoon, there were stops about 3/4 of the length of this block: 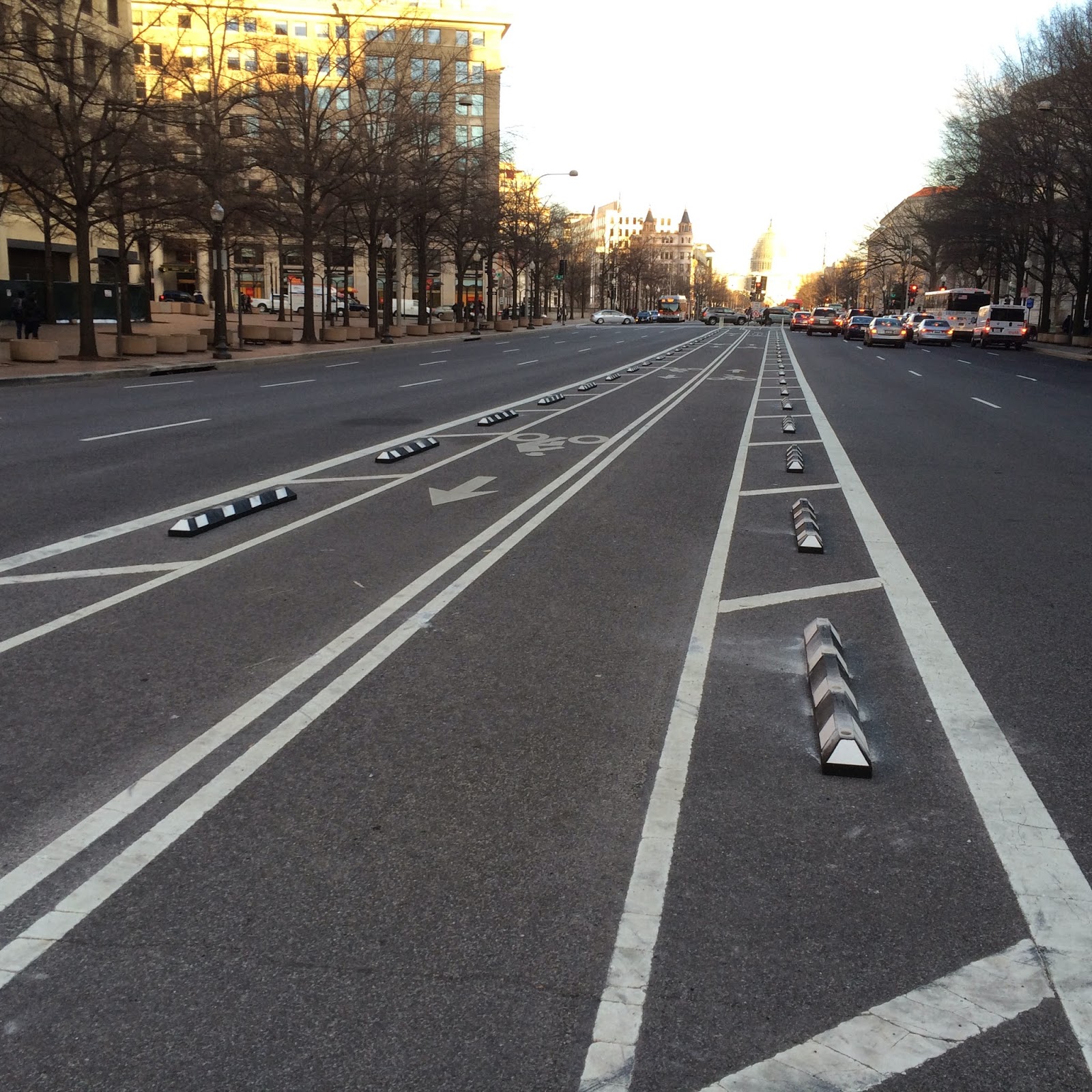 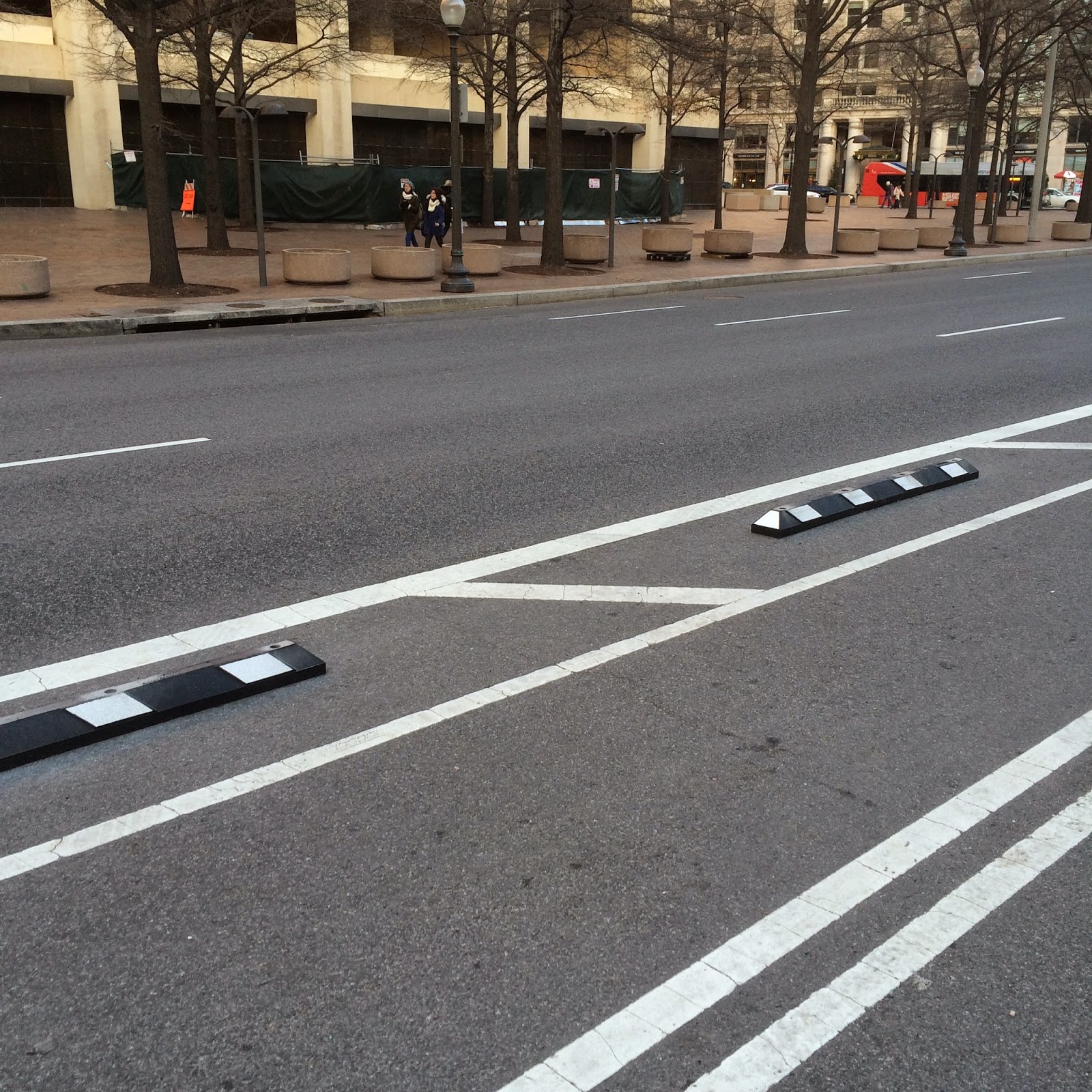 I think that maybe this could work. I worry, however, about the number of events that take place on Pennsylvania and whether these would need to be removed and re-installed throughout the summer. I don't know. Hopefully not. The perils of installing a center-running bike lane on America's Main Street, I guess.

So, that was Friday. But this is Sunday, and earlier in the day, I had the pleasure to take part in (but far from complete) the Hains Point 100. Hains Point, if you don't know, is a man-made island by the Jefferson Memorial that separates the Potomac from the Washington Channel and it's mostly a recreation site and has a pool and a golf course and it's a popular stretch for runners and, especially, cyclists, who ride loops around it. Each loop is maybe 3 miles, maybe a little less. Anyway, the idea is to ride a mentally mind-numbing century around HP for the very good cause of raising money for the WABA Women & Bicycles program.  As in previous years, I did just a few laps and went home because 100 miles is a really long way and 3 mile lap increments is a crazy way to get to 100 miles, but there were many people who did the whole thing and they're real heroes. So, if you're one of those people who did the whole thing, or one of those people who just showed up and did some of the thing, then you're a pretty great person and I'm glad that the DC bicycling community, whatever that is, has people like you in it.