IF you've got more than one bike, which is a dubious proposition, I might say, you might feel behooved to alternate the one you take to work. You might not, but I did, and so I've been riding the Cross Check the past couple of days. It's been all right and it's given me a reason to fiddle around with an otherwise fallow bike. Yesterday I adjusted the brakes and lubed the chain. Today, I monkeyed around with the seat pitch and angle. Was this necessary? Not in any strict sense. The bike would've gone about its business just fine without my messing about with it. But who wants a bike to go about its business just fine? You want your bike to go about just great! And this is exactly why you shouldn't monkey with and wrench it and fiddle about, especially first thing in the morning before coffee makes your brain work and even more especially if you have the wrenching skills of someone as inept (or more inept, if this is possible) as me. Takeaways:

If there's one consistent theme of this blog (some say I am the Samuel Pepys of the velosphere. Actually, not one single person says this), it's that every day is different and every day is the same. One day bleeds into the next and the day after is completely distinct from the one before it, except not in any substantive way.  And so its the same with the wrenching. You do it so you can do it again. And you do it again because you did it (wrong) the first time.

I rode through Washington Circle yesterday morning (though not this morning, since I took the tried and true method along the river) but unlike the other times I rode through the circle, this time I rode through the circle and not around it. Would bicyclists be better served with some kind of flyover ramp directly over the mounted George Washington statue? No probably not. Was it any faster to ride through the circle than around it? Probably not. Was it marginally less annoying and slightly safe? I guess, but not in any real way. Is there a reason why I don't normally come this way? It's because I like going the other way, the way that doesn't come this way, much more. The other way is the Mall way and this morning, I saw this: 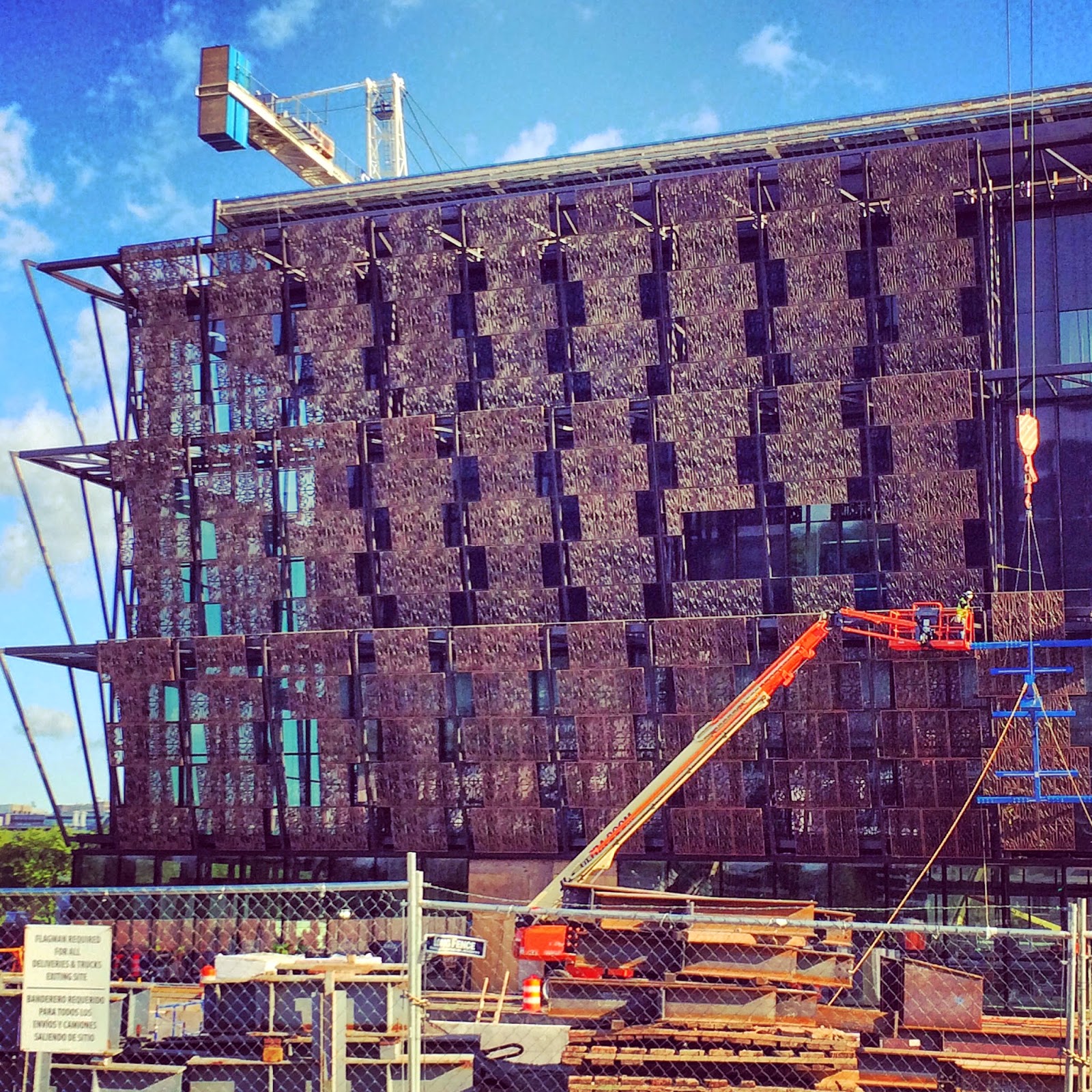 This is the new Smithsonian Museum of African American History and Culture. It's still under construction. It doesn't just have awesome cherry picker parking. But it's getting closer to done and these bronze-y panels will make for a really interesting and arresting exterior.

There's a PBS documentary about the National Mall and I watched some of it last night. I didn't find it especially, well, anything, really. I mean, public monumental and ceremonial spaces are what they are and thinking about them can be an interesting exercise, but I found the show to be more about back-patting than actual thinking. Maybe its impression is dulled by familiarity. I don't know. I mean, the Mall is nice. I like it. It's scenic. A pretty great bike route, especially in the quiet morning. But I'm not sure that there's anything about it that's a particular embodiment of a national character or even if the space is used in a distinctly American kind of way. There was a brief discussion of 'Mall as protest space' and I guess that's kinda something, but even that seems more like something about a history than a present way of conceptualizing it. 1963 was 52 years ago. I don't know. I'm probably not being fair. Anyway, woo public television.

On to the next thing: 31st Street NW. It's a Georgetown street and a special one. Some things I think about when I ride on it:

1. Interloping in someone else's neighborhood is so much more intimate when you do it by bike
2. No two buildings on the street are the same. There is no symmetry.
3. The buildings are all very tall. How tall? I don't know. I am terrible at guessing the heights of things. 50 feet? Is that it? If a giant woman was attacking and I was asked to title a movie about it, I'd probably call it "Attack of the Really, Really Tall but Maybe not Like the Tallest but still Tall Woman." It's currently in fashion in DC in some quarters to be *very concerned* about the height of buildings, but I don't know how much improvement would be gained if these buildings were lopped off at the top of the second story.
4. There are no gates. I mean, there are some gates (like at the entrance to Tudor House), but there are no gates on the street. It's a public street. These people who live here, who are most likely irredeemably fancy and well-off, still live in a city and they live in it and not apart from it. And I think that's important. If i learned anything from a brief foray into medieval archaeology, you put walls around the outside of your town, not down the middle of it.  There's no reason (at least economically, I suppose) that these people couldn't live out of town in a community with gates and a guardhouse and utterly cut off from the community around them. But they don't and even if they're the hoity-toitiest people in the whole of town, they still live on a public street that any only schlub on a bike can pedal past and this makes me feel better. What kind of sympathy can you feel for your community if everyone else lives on the other side of gates? What feelings do you feel for your fellow travelers when they're on the other side of a windshield? I don't know.

Yesterday evening I had to rush home and I did and I went as fast as my legs and lungs would agree and it was an ok speed. Today on the way home, I was in less of a rush but made it home fast enough anyway. There was some horse shit in bike lanes, but that's what happens when there are horses in bike lanes. There was some kind of motorcade that closed off streets and the nature of one person per one car meant that this slowed things up for a large number of people. How do motorcades work in a self-driving car future? Does POTUS get some kind of button that shuts your car off? Do all police? Will there be no more car chases? Has anyone consulted the tv news about this?