On Friday morning, I avoided the Connecticut-Calvert intersection by riding over to Woodley Road via Woodley Place. Here's a map. It'll be useful if you care to follow along with my premise, which is that Ward 3 is confusing and it's very easy to get lost. This is partially because all of the houses look the same and there are too many trees, blocking the sun by which I would normally navigate and also because the streets are all diagonals and OH YEAH ALSO THEY DON'T CONNECT IN ANY REASONABLE WAY and WHY THE FUCK ARE HALF OF THEM NAMED WOODLEY?!?! 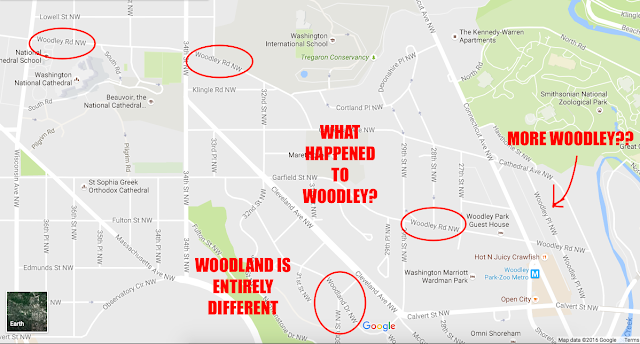 My normal route is pretty easy and pretty direct and I take it both ways, which is Calvert (horizontal in the map) to Cleveland (diagonal) to Garfield (horizontal) to Massachusetts (diagonal). It's easy and relatively direct, but it's also trafficky and I think sometimes 'oh, this is a quaint quiet leafy neighborhood with slow speed residential streets, why wouldn't I just take those?' So on Friday morning, I did and I rode up Woodley Place from the west side of the Ellington Bridge to Woodley Road and then eventually ended up at the familiar intersection of Cleveland and Garfield and considered the whole thing successful. Little did I know, however, that when I tried to repeat it this afternoon that I wouldn't be nearly as successful, but through machinations not of my own but rather those of the devious street namers and perhaps also the French nuns who founded the Maret School. I came down 34th towards Cleveland and thought I'd be able to make a left turn onto Wooldey, but little did I know, there was no Woodley to be found there. I had passed a Woodley previously, but I dismissed it as a pretender Woodley knowing that the Woodley I knew was the one that intersected Cleveland. But the what-I-thought-was-Woodley that intersects with Cleveland is actually Garfield and not Woodley. It changes name before it gets there. Why, you ask? I don't know! With no Woodley, I ended up making a hard left onto 32nd shouting 'here woodley woodley woodley woodley' as one is wont to do when one's woodley is missing. Keep in mind, that this is Woodley, not Woodland, which is an entirely different kind of wood and perhaps even a land onto itself. I have previously been lost on Woodland, but it's been years since I've ridden between Cleveland and Massachusetts, having been so scarred by this experience. Let's press on.

I rode north on 32nd even though I didn't think that was necessarily the right way to go and then I saw Cathedral and thought 'well, Cathedral. That's a street that goes somewhere. Maybe even to Connecticut' and then I turned onto Cathedral. And then on Cathedral there's a stop sign and there at this stop sign, snaking in from the left, well, look who's there- it's mother fucking Woodley. "Where've you been, asshole?" I might've mumbled. "I need to get on you now and ride you home." But how? Woodley intersects Cathedral but then it stops at the gates to the Maret School, so there was no riding Woodley home and I had left was to sulk along Cathedral, wondering where it all went wrong. Cathedral passed Connecticut and then I made a right...onto Woodley (Place), but I thought it was Road and I was mad that after all that time, Woodley had the nerve to show up again, when I needed it the least.

This was a few hours ago and I finally decided to look at a map before writing this post.

Friday afternoon I rode home via Massachusetts for the first time in a month or so and it was fine. Got hung up a bit by an overly polite traffic in Sheridan Circle (please don't wave me through, sir, just go because the other fourteen drivers in this circle also don't plan to cede the right of way and dear god aaaaaaaaaaaaaah), but made it to 20th where I locked my bike up outside to attend an event inside.

This morning's ride in was really nice. The weather was charming. It might be autumn someday.