Has anyone else been wondering what's going to happen to the post naming convention if this blog makes it a year? Like, will it just be Ride Home 2/2 even though there already is a post named exactly that? Should I start adding a year? And, really, if you've been thinking about this is a more than casual, glancing way perhaps you should run the blog because you're much more interested in its mechanics than I am.
I pre-tweeted the route home, then regretted it, then took that route anyway because, you know, just in case someone had planned on standing outside along the path with a sign that read "Sharrows woo!" or something to that effect, which has happened approximately zero times (so far) and I wouldn't want to disappoint them.
Mass was fine and relatively unbusy until the bottom of the hill. This is where the traffic always backs up and the bicyclist must choose to either ride with traffic and ride on the sidewalk. I stick the traffic because a little farther down the road, street parking is allowed and the street drops down to one-ish lane with enough room for a bicyclist to ride on the side. The parking stops at some point (before Florida) and then two lanes of backed-up cars again present a cyclist with a choice is waiting in traffic, filtering in between the cars and the curb or riding on the sidewalk. Choices, choices, choices and to the average jerk driver, nothing you choose is correct.
This made me take this picture. Let me know if you think this building is historic yet. 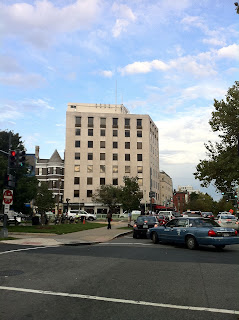 I've never noticed this building before. Maybe because I'm always looking at the people heading into and out of the Dupont Metro, which is considerably more interesting.
The usual stop and start on Q. Some guy on a cruiser ran a red and turned left and I raised my hands in a shrug-type maneuver for the benefit of the motorists. I finally figured out how to not screw up continuing on Q past 11th and Rhode Island, which I've screwed up when riding it a few times in the past. Turns out you just go straight. I took Q to Marion (not 6th!) because I thought it was 6th and then was all like "whaa?" when the street stopped in a block. If you were out with your sign at 6th and Q, I'm so sorry.
6th is pretty overbuilt, at least until Massachusetts, then it becomes a hassle again because of parked cars and right turn lanes and people "rocking the red" (which has something to do with communism or hockey. Capitals? Yeah, Das Capitals!) outside the Verizon Center. I cut my turn onto E way short, in that I rode basically into oncoming traffic and just barely made it to the left turn before the oncoming cars arrived and then I was confronted with this at E and 5th.
So, in case you can't see, that's E Steet, and its bike lane, under construction. What happened Sharrows Nation Monster Army? (This is my collective name for the 3 of who read this. I imagine you combine the best aspects the Colbert Nation, Kiss Army and Gaga's Little Monsters.) I pre-tweeted the route and no one could hook me up with some foreknowledge? Foreknowledge hook-ups are the foundation of any good relationship, right? Anyway, I rode the sidewalk and didn't get arrested, so it's not a big deal.

On the other side of the construction, I was able to pick up E, where I rode behind a couple of bicyclists and by Union Station a guy on a Dahon. And then I rode slightly in front of a far too large truck with a driver who drove far too closely, making me uncomfortable and generally unhappy. In Stanton Square, some jerk driver passed me on the right. Whatever. Some punk kid. Whatever punk kid.
Bon weekend and happy soon to be October, the month of pumpkins and whatnot.