Here's the gathering in Freedom Plaza: 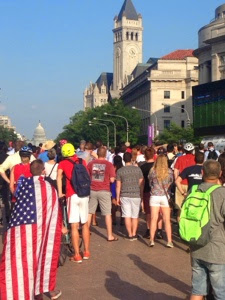 Heckuva lot of people for outside in a billion degrees and no (legal) alcohol. I'm not saying that public outdoor drinking is the solution to all of our soccer woes (in fact, it might bring about additional, non-soccer ones), but Freedom Plaza is the definition of "blah" and maybe we could pep it up a bit with some beer and hot dogs. What's more American than that? And what's more Freedom-y than making questionable decisions about cased meats of unknown provenance?