You can buy an expensive car. You can upgrade to leather seats and get fuzzy dice. Maybe you can even upgrade the dice to 12 sided ones (maybe you can afford the expensive car thanks to winnings from Dungeons and Dragons tournaments?) and you can pay for premium gas and for deluxe car washes. You can have satelite radio and GPS and maybe radar detectors and you could probably even install an after-market periscope. But you can't buy your way out of traffic and, frankly, I think that's un-American. If you're willing to pay for fancy seats and periscopes, the odds are that you'd also be willing to pay for less clogged roads. But how can we achieve this? It's a collective action problem- while you could pay your neighbor's bus fare to keep him from driving, it's unlikely that enough people would do that to have a dramatic impact. It might also be weird to accost your neighbor like that. So, I guess the answer is some sort of congestion pricing scheme with the funds being spent on better public transportation options for former-would-have-been drivers. But where does that leave bicyclists? With more open roads, you've raised the potential average speed for drivers and unless some of that congestion money (totally theoretical at this point) is being spent on cycling facilities, bicyclists would be in no better shape than before and maybe even worse off. Are drivers going to want to pay congestion pricing to drive through a downtown that's been retrofitted to become better for bicyclists and pedestrians?  I've got nowhere else to go with this, so I'm just going to trail off now...
Anyone else ride on the sidewalk temporarily to get to the other side of a red light and then get back on the road? It's sort of a sniveling way to get around a red, but it makes me feel less guilty. I'm not sure about the legality.
The warm weather drew out the lightless again. Disappointing. Bike lights make great stocking stuffers. Also, isn't one of the reindeer named Blinky?
I saw a woman with sparkly, silver-sequinned boots and I told her that I liked her boots. She said thank you. I don't know how many compliments she gets on her bootwear (not a word?) selection, but I felt that one was necessary. I don't know how many sequin trees needed to be cut down to make those boots, but let's hope the look doesn't take off because I don't think it's sustainable. Yes, I'm aware that sequins don't actually grow on trees.
I'm a proud DINK (two nights ago, we had baked brie and sparkling wine for dinner. Can't give that to a kid. DINKhood rules) and as such, I hate suggesting to any parent that he or she do or not do anything in particular with regard to a child. Frankly, it's none of my business. But it doesn't stop me from noticing stuff that concerns me and I noticed last night a woman riding with her kid on one of those kid trailer bikes and the bike had no rear light. I think this is inadvisable. If I were riding with 'precious cargo' behind me (let's say a trailer full of brie, puff pastry and sparkling wine), I'd probably want to make sure that was adequately lighted to better ensure its visibility.
And then the night happened (but not before more biking. The Official Wife [who will be there towards the beginning of the first-ever Tales From The Sharrows Tweetup/Button Purchasing Happy Hour. Tonight from 5:30 at the Black Rooster] rode down to Barracks Row for dinner at Cava Mezze) and I woke up this morning and biked again, as is my wont. Towards Lincoln Park, I saw a woman riding an Xtracycle with two kids straddling the back. Badass. I told her that I liked her setup and she said something like "Pretty loaded down today. Just trying to get to work." Presumably her work, since she didn't look the type to run afoul of child labor laws. It's hard enough for me to drag the weight of an extra pair of shoes the office. She's dragging two extra pairs of shoes and these shoes are attached to small children!
Due to another shipping failure/postal larceny (Postal Larceny is the name of my ska band), yet more buttons failed to reach their mark. These buttons were purchased by none other than the Randonneuse Prime herself, MG from the very popular bicycle blog, Chasing Mailboxes. Seeking to rectify the situation, we arranged to meet for a button hand-off rather than chance postal larceny once more. I arrived to Swing's Coffee and I could tell from the bevy of bicycles outside that there was a randonneur thing inside. 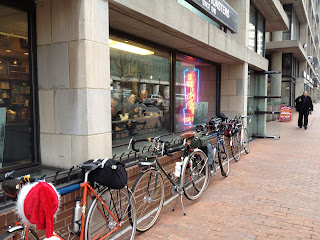 And what would a button hand-off be without a button panda? 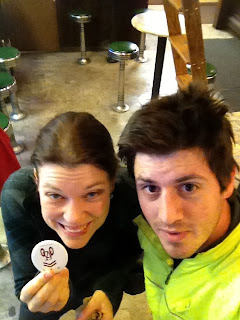 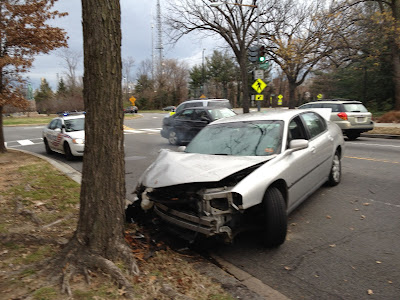 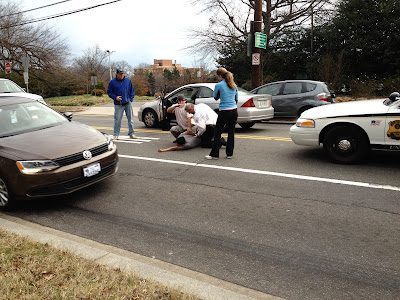 I guess some guy smashed his car into a tree and then tried to flee. And then some other people caught him and pinned him down in the middle of the road. He was struggling mightily to escape. Looked like it was causing some traffic tie-ups along Nebraska. It's not every day that something like this happens in this part of town, so I felt obligated to take a picture. I don't know what that says about post-modernity. Hopefully nothing, since we'd have to deconstruct it anyway.