Wikipedia tells us that "agriculture was the key development in the rise of sedentary human civilization, whereby farming of domesticated species created food surpluses that nurtured the development of civilization" and that's great and all, but being sedentary is no fun, unless you're sedentary on a bike seat and you have the chance to do that on Sunday while also exploring the city and basking in the glory of 10,000 years of continued human agriculture. What do they grow in these gardens? Do they grow community? Do they grow turnips? Who knows? I'll tell you who knows- future people, namely the people in the future, around Monday or so, who went on this bike ride and visited these community gardens. But only the future people who were present because they found the time to forsake being sedentary to see the very thing which allows us all to the sedentary. That's assuming, of course, that the future people can even remember what they saw because the thing wraps up with a happy hour at the Passenger.

Hey look, it's TFTS Classic, in which I revert to old habits and write about my bike commute Maybe it should be called TFTS Neoclassical but DC has enough neoclassical stuff and we hardly need one more column in the capital (double column pun!). Something something pilaster. Anyway, let's away.

I took the same old route down East Capitol and through and down the Capitol grounds and up Pennsylvania Avenue. There were many bicyclists out, include at least one woman on a Bikeshare who wore a winter coat, which in my opinion, is a bit too much as it is not yet winter. But #coats, right? It might have just been too much in a comparative sense rather than an objective sense because I was wearing shorts and short sleeves and I have a difficult time believing that both of our attire choices could be weather-appropriate given the temperature. But then I remembered my old maxim of "don't care about what clothes other people on bikes wear" and I was assuaged. It'd amazing what apathy and ambivalence can do for your well-being. It's less amazing what apathy and ambivalence can do for other things, like house plants or other things that need care and attention to remain not dead.

Speaking of care and attention towards things remaining not dead, the District Department of Incessant Weather Tweets Transportation has gone ahead and extended the bike lanes on 11th Street from Massachusetts Avenue to Pennsylvania Avenue. This is a huge win for the cyclists of DC and a very important addition to the bike lane network of the downtown core area. Here's a picture of the bike lanes and you'll note that they look like white stripes as they tend to do. DDOT has yet to take my suggestion of painting a faux yellow brick pattern on all bike lanes and in a totally amazing Wizard of Oz homage. Maybe next year.

These bike lanes will be especially useful because 1) 11th street itself is a pretty important corridor for cyclists and 2) 7th and 9th Street are complete disasters, so this is a nice alternative.

Speaking of alternatives to complete disasters, it would have been nice had someone removed this from the Pennsylvania Avenue cycle track. 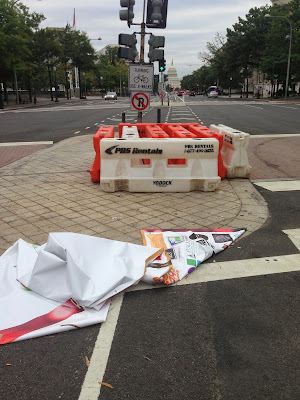 There's a certain level of fuck-you-ness about this that I simply can't condone. It's one thing to close long stretches of Pennsylvania Avenue for long stretches of time (as happens nearly every weekend) and it's another thing to do that and then fail to clean up afterwards. I don't know if these barriers remain still, but I certainly hope not. It's dangerous. And also, fuck-you-y, as I mentioned previously.

I rode up 11th to R and took R, which was replete with cyclists, across town. Near R and New Hampshire, the woman on the bike behind me asked me about some kind of helmet that has a hat built in that folds up and I talked to her for a little and showed that my hat and helmet were, in fact, two separate articles and separable. She then mentioned something about how my hat would be better if it had earflaps for when it's cold and I told her that some cycling caps do have ear flaps.

R to Massachusetts and the hilly slogfest that is the second part of my commute. Before that, I saw Kristen and yelled "Kristen" at her. I followed that with a "woo!" Nothing more I love than yelling people's names at them. I wish I lived in medieval Venice so I could've yelled Marco Polo at Marco Polo and then blindly tried to tag him and he so wouldn't have got it and I'd have to explain and he still wouldn't get it because my medieval Italian is horrible.

There is a new Nelson Mandela statue in front of the South African Embassy, but I didn't stop to take a picture. There were no new statues in front of any other embassies, but of the three statues I can think of along the hillier parts of Mass Avenue (Nelson, Winston Churchill and Queen Margaret of Norway), all of them are sculpted with the one holding one arm aloft. Now, that's a pointless and mundane observation.

Speaking of pointless and mundane observations, this concludes Tales From The Sharrows. Thanks for reading.
1 comment:

There are many annoying things about bicycling that I have come to love and here are some of them in no particular order explicated to whatever extent I felt was appropriate.

The Weather- Sometimes it's hot and that engrosses you (not the correct usage) and sometimes it's cold and sleeting and you are soon covered in cold sleet and your toes are number than your fingers (though both ten hopefully?) and your nose is even number (2..4..6..) and you question why you're outside and/or if you will ever be able to experience sensations of warmth ever again. Other times it's nice. Then there's wind, which is a subset of weatheriness which theoretically could be at your back (note: never happens) or bluster you face-wise until you're traveling negative 5 miles per hour. Basically, if even half the days fall within your weather "don't mind biking in this zone," half will fall out of it. But that's ok! Biking in conditions that aren't your ideal ones is still better than climately controlling yourself in a gilded, gas guzzling birdcage. Probably.

Smells- Sometimes you get to smell good stuff, like freshly cut grass or baked bread. [I will simply ignore the vast majority of other urban smells that you are more likely to encounter. Also, I've had occasion to bike by an honest-to-goodness fish market on a summer afternoon and you shouldn't do that sort of thing]

You can hear other people and they can hear you- Aren't people the worst? Don't they talk about the most banal and stupid stuff? Aren't they all like "something something Senator Ted Cruz something something"  all of the time and isn't that just the worst of all sorts of ear pollution? Aside from actual pollution which might infiltrate one's ears. However, the rolling eavesdrop is easily one of the best parts of any bike ride. Extrapolate whole relationship histories from snippets! Reverse engineer the setups of bad jokes from the punchlines of those very same bad jokes! Marvel at what strangers have to say about other strangers in front of other strangers. Oh, and be careful if you have the tendency to talk aloud to yourself while riding. More than once I've said "well, that was some terrible driving' within open-window shot of the offending driver.

Endlessly covering the same terrain- This isn't really unique to bike commuting. It's the same for drivers and bus riders and metroists repeatedly revisit the same subterrain. So, it can get boring. But I find that commuting my bike really attunes me to when things change- stores and restaurants open and close, potholes appear or are filled, road stripes are restriped- you know, exciting stuff- and it's nice to have one slice of the city that you know really, really well and can feel live and breathe under you and around you as you pedal through it.

Red lights- The knock on bike types for some reason is that we are sufficiently in awe of the amazing traffic control powers of traffic regulatory devices. This makes us just like every other kind of traveler. Drivers tremble not at warnings that they oughtn't, no matter how much they might want to, turn right on red. Some don't, some do. I've yet to see groups of pedestrians attempt to blockade or claw back an intrepid Icarus from risking it all against the Stern Red Hand. But anyway. Red lights seem like they should be annoying because they slow down the march of progress, but they really aren't that bad. They give you time to sip coffee or water or Sport Drink or to catch your breath or to [single sappy people only] lock eyes with a stranger and fall deeply in love or to look at someone's sneakers and think "do I want a pair of sneakers that look like that?" Other things you could do at red lights include checking the time or trying to remember some trivia factoid. Red lights are the punctuation marks in the sentence that is your bike commute. May it be a life sentence. Wait, what?
2 comments: