Another summer day, but it's late August now and while there are more that await us, it's close enough to the brief time of year when it's no longer terrible and you can feel the brimming excitement. I'm excited too. Those 4 days in September are going to be great.

It was the first day of school, but I didn't see a lot more kids out on bikes than usual. Slackers.

Mall route over to Rock Creek and I rode on the road rather than the path. The road is wide and pleasant and empty and also technically closed so maybe let's not tell the Park Police lest they shut me down. I mean, really, is there a more victimless crime than cycling on an otherwise empty road? Like, it's negatively victimless in that I quite benefit from it. We should aspire that all illegal activities have at least negative one victims.

Banana Republic (the clothing store, not the Central American kleptocracies) loves bicycles and they're sharing that love with us by telling us as much in their window displays. My value add is the glare.


34th Street to Volta to 35th and eventually up through Glover Park and New Mexico Avenue. The way home took my down Massachusetts Avenue to 21st Street to L. Here's a picture without any context, but maybe we'll come back to it later in the week. 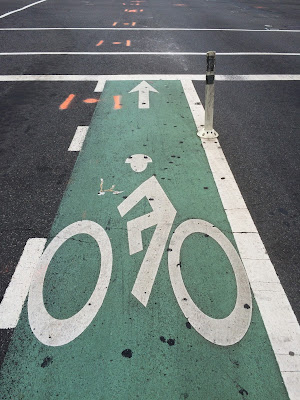 15th to Pennsylvania (u-turn at 14th) and then I passed something I thought was funny and almost went back to take a picture (maybe tomorrow) and then it was a few blocks where there were red lights and those who can't seem to queue. Shoal me once, shame on me. Shoal me twice, I'm gonna pass you going uphill. On the Ogre. While whistling.