Were we not promised thunderstorms? Some kind of epic commute-time rain? It didn't happen. I'm not entirely disappointed, but had I known that I would've made it through these commutes free from rain, I probably would've taken a lighter bike. The Ogre, though fixed, is still just a little too heavy for these hot, muggy days. I mean, I get through them fine enough. Fine enough.

Oh, hey, the clicking noise that I thought would go away when I got my bike fixed didn't go away. Time to think about other things that might click. Examples include: literally every other part of my bike.

Mall route past the monuments, set to the backdrop of a gray (but impotent) sky. It must be marathon training season again because the paths are awash in runners. A slight digression: for reasons (?), I've recently taken to using my lunch break to run on a treadmill. I've never really been a runner- most of the running I've done in my life was in the context of sport (soccer) or to flee from wild animals (poodles)- and so it's surprised me somewhat to discover that I don't totally mind the mindless miles. To look for escapism on a treadmill is a funny idea, I guess. I wonder if that's what the hamster is looking for in his wheel. To circle back to the earlier point, I have no plans to run outside or train for a marathon or any race of any kind, but I think I'm keep on with the pointless going nowhere that in running in place and see if I can make progress at that, if that's even possible. This is the last I'll mention it.

There's a paucity of bike parking in Georgetown, but some entrepreneurial spirit is using it to try to sell this vintage bicycle: 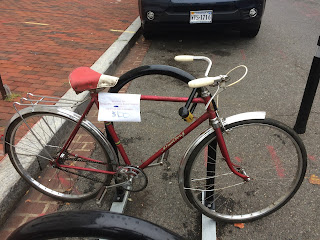 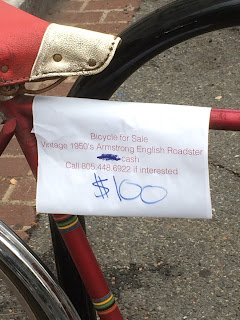 I don't know if he's going to get his Benjamin, but I hope that one way or another the bike is gone soon. Yeah, I get that this is a *clever idea* but people really need a place to park their bikes way more than you need a place to advertise selling it.

If you have a dinner reservation, do you get to break the less grave traffic laws during your bike commute? Some say 'no, that's a ridiculous assertion and not in any way ok, morally or otherwise' Others say nothing and trail off without really answering the question, nor copping to any misbehaviors they might have indulged in.